Out of the Woods by Lyn Gardner 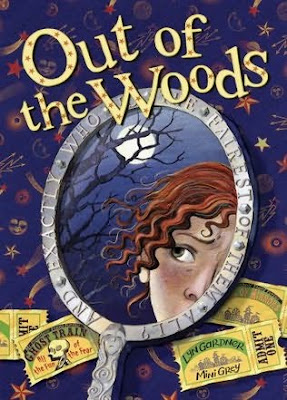 The fun fair is in town! With its clouds of pink candy floss and whirling big wheel, what child could resist such temptation? Little do the Eden sisters know that they are being lured into a wicked witch s lair. . . . Belladonna wants Aurora's heart and Storm's all-powerful musical pipe, and she will stop at nothing to get them. Driven by vanity and greed, she makes a truly formidable adversary.

After escaping from a deadly game of hide-and-seek in the enchanted fair, our three heroines flee through the woods, with several ravenous wolves and a sweet-toothed lion hot on their heels. Now they face their biggest challenge yet: a treacherous journey into the Underworld. For only when the pipe has been safely returned to the land of the dead will the Eden sisters truly be out of the woods. . . .

What's really fun about Out of the Woods is that you are very quickly caught up with what has gone before, making this an almost-standalone novel which you can tackle with ease.

As in Into the Woods, the three sisters are lead astray and into a lot of trouble. Here, we have the relative of one of the previous baddies' come back for revenge. And you get the distinct impression that the witch Belladonna is far far meaner and more intelligent than deWilde from the previous book. I mean, let's face it: women are by FAR more ruthless as villains, they are also great to write and Ms. Gardner looks like she had a whale of a time playing with Belladonna.

Belladonna is interested in Aurora for her heart. With the heart of "the fairest in all the land" she can renew her youth and take revenge on behalf of her sister Storm and Aurora killed. Belladonna also wants that pesky flute that Storm tossed away but it has somehow made its way back into her ownership again.

Storm's big quest this time around is to travel to the Land of the Dead in search of Pandora's Box, from which the flute was taken in the first place.

As in Into the Woods what is central to the story is how the three sisters always have each other's back. Their motto of "Forever and Always" binds them together and it is a theme that is returned to often. I also think it is a very positive motto to have and what I like about Storm especially is like great action heroes in books and movies, she is constantly moving forward, thinking ahead (or sometimes just acting on gut instinct) but the onward momentum is kept high and constant. I like that and I approve of it for heroines and heroes.

These two books, Into the Woods and Out of the Woods have become firm favourites on my bookshelf. And books I'd recommend to younger and older readers alike. Again I'd recommend it to both boy and girl readers as I feel boys and girls will enjoy the Eden sisters' adventures of daring-do. And of course, the illustrations by the incomparable Mini Grey is just excellent and tongue in cheek amusing.

In fact, I am so excited about these two books, I've asked the publicity girls at Random House to please let me have copies to give away…and they've agreed.


**COMPETITION**
Very simply, tell me what is your favourite fairy tale - it can be Western, European, Russian, Chinese, Japanese etc. There will be a random draw on the 30th for the winner. Entrants from the UK only and again, you may enter as many times as you like!
Who wrote this? Liz at 5:32 pm