My So-Called Haunting by Tamsyn Murray 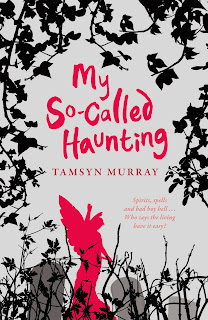 Skye, a fourteen-year-old who can see ghosts, is very stressed. Not only is the ghost of a sixteenth-century witch giving her fashion tips, but she’s struggling to settle into life with her auntie, and is developing a crush on the most unattainable boy in the school, Nico.

When her aunt asks her for help with a troubled teen ghost called Dontay, she’s glad of the distraction. But then Nico starts paying her attention, and she’s soon facing a battle to keep her love life and her psychic life separate.

As things get ever more complicated, it looks as though Dontay’s past may cost Skye her future.

This was a bit of a departure for me – my usual fare is miles away from climbing inside the head of a 14 year old girl. But then, half the fun behind the blog is trying new things. And besides which, Liz raved about Tamsyn’s previous offering, My So-Called Afterlife, so I figured why not..?

MSCH hits the ground running, and the first few pages set up Skye’s quirky family and her how she’s come to be at a new school, with all the attendant stresses that are part & parcel of that kind of move. It quickly sets the stage without being obvious about it and makes MSCH both accessible and enjoyable whether you’ve read the previous book or not.

Skye’s day to day life quickly dispels any notions that being able to see and communicate with ghosts is cool. Besides the usual troubles that come with school and peer pressure, she has to balance her gift and avoid being labeled a nutjob, not an easy task when the dead demand your attention. But when Nico, the handsome, somewhat mysterious boy that every girl fancies, takes a liking to her, things start looking up.

But her gift doesn’t care about her personal life, and it’s not long before things go from great to complicated (at best).

As a helper at her aunt Celestine’s halfway house for troubled spirits, both living and dead, she gets drawn into the unfinished story of Dontay, a murdered teenager. As she starts putting the pieces together, it becomes clear that the repercussions of Dontay’s death have yet to run their course, while Nico’s mysterious nature also starts coming into focus, revealing far more than she ever dreamed -or feared. There’s a real sense of things spiralling out of control as her life and psychic gift collide in unexpected ways.

Amongst all of this she has to deal with the prudish, disapproving ghost of a sixteenth century witch, jealous love rivals, detention, and helping Jeremy avoid the obsessive attentions of a lonely suicide victim.

Tamsyn’s crammed a lot into MSCH, but handles it all with a light, fun touch and a pragmatic sensitivity that counteracts the darker themes it touches on. More than anything, it has that extra something that makes you want to read just one more page before you put it down.

I’m happy to admit that I enjoyed more than I was expecting to, and I’m definitely keen to get my hands on the next one..

Hurrah! So glad you liked it, Mark, and thanks for reviewing. There's plenty more Nico to come :)

Another awesome sounding ghost story! This sounds like a really fun read, thanks for the review!