My So-Called Afterlife by Tamsyn Murray 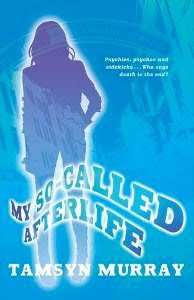 Synopsis:
Lucy Shaw is a ghost with problems. First, she’s stuck haunting the men’s toilets on Carnaby Street, not the best place to spend eternity. Second, no-one can see or hear her. And third, the man who killed her last New Year’s Eve is still on the loose. Is it any wonder her mood is blacker than a tramp’s fingernails?

So when a lighting engineer called Jeremy walks into the toilet and asks her what she’s doing there she’s not exactly Miss Congeniality. But given that he’s the only person who can see her, she decides to overlook the fact that he’s drippier than a toddler’s nose and accepts his offer of help. Before she knows it, she’s out of the toilet and meeting other ghosts, including the emotionally unstable Hep and the lip-smackingly gorgeous Ryan.

Together, they track down Lucy’s killer, encountering meerkats, exorcists, and the world’s stroppiest tattoo artist along the way. Will their efforts to catch Lucy’s murderer succeed? What happens if they do? And just how do you go about snogging the boy of your dreams when you don’t actually have lips anymore?

Argh! Tamsyn Murray is the biggest pain in the world. My So-Called Afterlife is annoyingly good. She makes writing look so effortless. It's when you're on a train and you've reached your final destination and you're still sitting there, five minutes on, reading, until your co-passenger gently nudges you with a "Do you think we should get off now?" that you realise you've been hooked.

I wasn't sure what to expect from My So-Called Afterlife, I have to admit. I wasn't sure if it was going to go the melodramatic and heartwrenching way or if it was going to go over the top and utterly silly in a Derek Acorah kind of way. I was in for a big surprise and one I should have seen coming. It didn't go either of these two ways. It went a different way. It went the Tamsyn and Lucy way.

Ms. Murray's managed to write a humourous, pithy novel from point of view of a murdered girl, who for some reason, has not moved on, and haunts the Carnaby Street men's toilets in London. It's not The Lovely Bones at all - it's better because there is resolution, soaring moments, action, angry ghosts, weepy moments, kissing moments, jokey moments, friendship moments and feelgood moments. It works on many levels and it's cheering and heartwarming and lovely.

Lucy's a cool mouthy girl with an amazing sense of humour and with a strong sense of who she is in a world that's gone off kilter. It's not like she expected to be murdered in a public toilet! She's been trying to talk to people for months but no one sees her, until Jeremy walks in off the street and he actually sees her. Their first meeting is a treat to read - I rocked with laughter because it is written to feel very real.

The story focusses on Lucy but her supporting cast is strong. Jeremy turns out to be a genuinely decent guy who takes it upon himself to try and figure out what's preventing Lucy from moving along. He seems taken aback with his own ability to see Lucy the ghost but you know, he deals with it pretty smartish and without much hassle. When Lucy tells him her story he starts poking around and investigating her murder himself.

Through Jeremy she meets Hep, a suicide, who has anger issues. Hep's not moved on either and it's through Hep that we experience the wilder emotions that Lucy no doubt feels to a certain extent but never acts on. Hep's story is particularly poignant and I cried like a little girl as I read it through. Hep teaches Lucy how solidify enough in order to move objects or have some kind of impact on them, and soon the two of them become friends. Lucy's final member in her supporting cast is the vastly sweet Ryan who passed away in a car-wreck but it left his father in a coma. Ryan's gift is unique and as him and Lucy start spending time together it's apparent that they are meant to be together.

Deeply moving and beautiful and funny and quirky, My So-Called Afterlife is a must read. It's being marketed as a teen read from Piccadilly Press and to be honest, if you're an adult and you enjoy books with a touch of supernatural to them, you'll thoroughly enjoy MSCA.

My So Called Afterlife by Tamsyn Murray is released today - 25th Feb - and should be available online and at all good book stores! Find Tamsyn's website here and this is her blog. Stay tuned for an upcoming interview and competition with the lovely Ms. Murray.

Okay, you've just sold a copy of this. I was wondering if I should read this as part of my Debut Author Challenge and now I'm decided. It sounds hilarious and quirky! Great review!