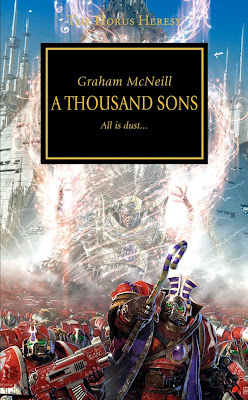 The Great Crusade is at its height, and the Thousand Sons are its most dedicated warriors. Though utterly loyal, the Legion of Magnus the Red is viewed with suspicion for its arcane methods. Feared by the Imperium he has sworn to serve, Magnus is called to the planet Nikaea to answer charges of sorcery.
When the ill fated primarch foresees the treachery of Warmaster Horus and warns the Emperor with forbidden powers, the Master of Mankind dispatches Leman Russ, Primarch of the Space Wolves, to attack Prospero. But Magnus has seen far more than the betrayal of Horus and his revelations will seal the fate of his Legion forever.
When I opened A Thousand Sons for the first time, it was with unusually high expectations, contrary to my normal approach- the story of Magnus the Red and his condemned Legion has surely got to be one of the most eagerly awaited instalments of the Horus Heresy series, and combined with the knowledge of how addictive Graham's writing is and teasers like this it was nigh on impossible to avoid it.
The problem with high expectations is, of course, that it creates a greater scope for disappointment. I was expecting a lot from A Thousand Sons- I wanted to know what the Legion was about, who these Marines were who had so blatantly thrown their lot in with the forces of Chaos. I wanted to understand how their fall came about, and why. I wanted sympathetic characters, drama, and thundering action.
And Graham has delivered the goods, and more. The book comes in at 558 pages, and not one of those is wasted, the writing lean and tight. The seamless way that the various subplots and concepts come together, while still delivering a clear picture of the Legion and it's history without it ever feeling too 'heavy' is testament to Graham's ability to tell a damn fine story.
The story primarily follows Ahriman, Chief Librarian of the Thousand Sons and his relationship with Magnus the Red, but also touches on the human 'remembrancers' who follow the Great Crusade, and the picture that emerges is a far cry from from what you might expect from a Legion that history records as being condemned for their treachery and sorcerous ways.
It's an interesting mix and keeps things fresh, even while you're trying to decide whether to weep or rage as events are set in motion that will lead to the savagery of the Space Wolves being unleashed on the erstwhile brothers. As Dan notes in the clip linked above, it's a tragedy that unfolds, one that leaves you with bittersweet musings on what might have been if things have worked out differently.
But that's part and parcel of what makes A Thousand Sons, and the series, so unmissable. 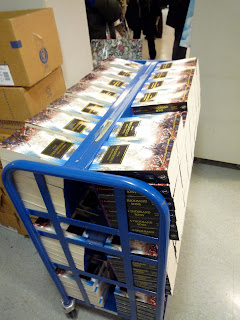 ..... now all I have to do is survive the wait for Dan Abnett's follow up, Prospero Burns. Aaargh.

**Edited to add Competition News!**
Just got the go-ahead to give away two copies of A Thousand Sons by the awesome Graham McNeill. This is a superfast competition - email us at: myfavouritebooksatblogspot (at) googlemail (dot) com with your name - entries no later than this Sunday, 28th February 2010. We'll announce who the two winners are on Monday and the boys from Black Library will be sending it out to you. Please note this is UK only!
Who wrote this? Mark at 6:34 pm