The Lord of the Mountain by James Lovegrove 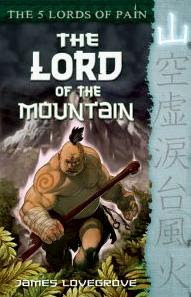 Tom Yamada seems like any 15-year-old but he's actually a supreme martial artist, training daily to face a terrifying challenge when he turns 30. It's his destiny to fight the 5 Lords of Pain - demons who have been trying to break into our world for centuries. But something's gone wrong. Tom must face the 5 Lords now - and no way is he ready. If he loses, a new Dark Age will begin. No pressure, then ...
First book in a brand new Barrington Stoke series. Visit the new Lords of Pain website at www.fivelordsofpain.co.uk

Personally I think James is an amazing writer - skilled at turning his hand to various genres and age-groups and making it work. When I heard about this series he's putting together called "Five Lords of Pain" I was struck by the utter coolness factor and of course, being the greedy little guts that I am, I desperately needed to read the first book.

I sat with it yesterday morning and read it twice. It gets better with each reading. It also cries out to be read aloud.

It's Mortal Kombat for a younger generation. Only this time, there aren't any other fighters to take on the bad guys. It's only Tom. If he fails, the world will fall to the Lords of Pain and humanity will be enslaved. That's it. No pressure then, right Tom?

Heavy going for such a slender book for the younger folk but to be honest, Mr. Lovegrove pulls it off with aplomb. I am chomping at the bit for the other books, I want to find out the challenges Tom will face. Something's gone awry and instead of battling the Lords of Pain in 15 years' time, they've decided to challenge him now, fifteen years too early. This means that Tom has to get his head into the game much faster than he and his tutor, Dragon, anticpated. You realise that like all teenagers (and adults) Tom is good at putting things off: I'll train harder tomorrow, I have plenty of time to do that as an adult or I'll eat better food when I'm older and in the meantime I'll enjoy junk food cos I like it. All of this conspires to a feeling of dread as you realise what's happening and that he has to face the Lord of the Mountain far sooner than he could have dreamed. An awful situation! Dragon starts drilling Tom intensively in various weapons and fight techniques. But as a reader I thought: frack, no way in hell is Tom going to pull this off! It's too soon, dammit!

The Lord of the Mountain is such a fun book - I loved it. It has enough martial arts info to keep all martial arts fundies happy and Tom as the reluctant hero is someone you can root for. Written for readers with reading difficulties I'd push this up a notch and say that everyone should give it a try - the writing is excellent, the plot runs smoothly and it's also quite a visual book so you can literally see it all take place in your mind's eye, which is something I love. The cover totally rocks your socks off too - the manga inspired cover is very clever and the depiction of the Lord of the Mountain on the front is just perfect.

Do check out the Lords of Pain website for more content, events and free stuff! Also do look at the Barrington Stoke website for upcoming and existing titles - many authors whom I've read in the past (before my blogging days) are listed and I for one can't agree more with the first line on their site: Barrington Stoke believes in stories.
Who wrote this? Liz at 9:41 am