As regular readers of MFB should know by now I'm a sucker for any type of quest/adventure novel with the guts to be unique and well written. I have a troop of authors whom I love and am always on the look out for new people to add to the list.

Naturally I was incredibly excited to spot this "new guy" via a Facebook group that I belong to. I checked out his website: http://www.hamiltonwende.com/ - and in a fit of budding fangirly-ness, contacted him via his agent Ron Irwin who in turn kindly put me in touch with Mr. Wende.

Bearing in mind I've not read House of War and that they don't know me from Adam, I think they reacted with great dignity about being contacted out of the blue with a request to write MFB a guest blog. The reason I approached them is simple: the write-up about House of War spoke to me and I wanted to find out more about Hamilton, his writing and the book. So, before I bore you all to death with my waffling, I'll hand the blog over to Hamilton Wende, freelance journalist, producer, action adventurer and all round gracious guy, to tell us about his upcoming novel and how it came to be written: 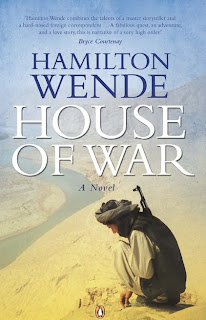 About my latest book:
House of War is a unique novel – an ‘English Patient’ for the War On Terror. It draws its inspiration not only from Michael Ondaatje, but also from Graham Greene, John Le Carre and Dan Brown. It is a thriller set in contemporary Central Asia, complete with warlords, Al Qaeda renegades and NATO troops, but with flashbacks to the character’s pasts in the United States, the former Soviet Union and the former southern African country of Rhodesia, today Zimbabwe.

The novel works on many layers. It has a clear, driving narrative that is cinematic in style in its fast-paced cutting from scene to scene. The reader follows the journey to the ruins of an ancient Greek city founded by Alexander the Great in today’s war-torn northern Afghanistan in bite-sized chunks. Each scene is a little like a potato chip, drawing the reader to want just one more, and then another, and another.

At the same time, it is a blend of psychological thriller, spy story, romance, and a quest novel - a search for a long lost copy of Alexander the Great’s Royal Diaries hidden in the ancient city of Ay Khanoum, located deep in the hostile territory of today’s northern Afghanistan. What makes the book unique as a thriller is that woven as a parallel thread into the action of the contemporary adventure is a deeply-researched story of Alexander the Great and, Roxane, his first wife and the love of his life.

How it all started:
In 2001, only weeks after 9/11, I found myself on a steep hillside alongside a T-54 tank dug in on the front lines with the Northern Alliance troops. Below us was a wide gravel plain that stretched to the horizon where the Taliban had their front lines. A clear, cold river ran through the no-man’s-land between us. The sound of gunfire echoed sporadically through the autumn air.
One of the Northern Alliance soldiers, completely unconcerned about the gunfire, banged his fist on what on what seemed to be an ordinary chunk of rock between us. ‘Iskander,’ he said loudly while banging on the rock. ‘Iskander.’
At first I couldn’t understand what he was getting at. Then, suddenly, it dawned on me. That chunk of brown rock was part of the remains of an ancient Greek ruin from the days of Alexander the Great.
He was reaching out to me, trying to share something of his pride in his homeland and its ancient history. It was an extraordinary moment of human solidarity. I wanted to pause and try to speak to him through our interpreter, but there was a real war going on around us and we had journalistic deadlines to meet, so I couldn’t spend any time with him. I snapped a few photographs of him and the front lines and then we had to rush off to film something else.
Some months later I returned to Johannesburg. I couldn’t forget that Afghan soldier and his proud, insistent ‘Iskander, Iskander.’ Because of him I began to research the history of Alexander in Afghanistan. One morning I found an old copy of Scientific American from 1982 in the Wits University library. It was perhaps the last scholarly article on Afghan archaeology written since the Soviet invasion, about the discovery of a lost city founded by Alexander the Great in Northern Afghanistan called Ay Khanoum.
I flipped through the pages, and – it hit me like a bolt from the blue: The cliff face in an old black and white photograph in Scientific American was the same cliff face in one of my photographs from the front lines.
I had been to Ay Khanoum without even knowing it. Call it fate, synchronicity, chance, but the threads of the Moirai are spun deep and wide indeed. I had my story - thanks to that Afghan soldier and his insistence that morning on the front lines in dragging me out of my fear and showing me something that I would never have discovered without him. Now all I needed to do was to find Claire and Sebastian, Abdulov, Mahmood and the others to go on the fictional journey with me.
I hope you enjoy going on it too! 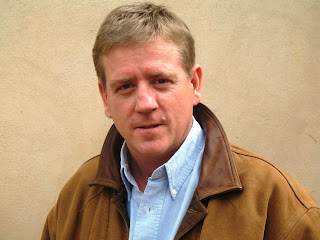 Random thoughts on writing and the creative journey:

I was born in the States but have spent most of my life in South Africa, with some side trips to live in Japan, Paris and lots of time in London. I have also traveled extensively in Europe, Africa and the Middle East. This sense of being on the move through our world and a career working as a foreign correspondent for many of the big networks such as CNN and BBC means that I am fascinated by boundaries and identities and how we never have a fixed ‘being’, but one that changes constantly as we grow and travel and learn. In my writing - both fiction and non-fiction – I like to explore the paradox between where we find ourselves and where we want to be.
I am fascinated by characters who have parallel lives and a sense of adventure about living those lives. Pain in life is a given – as the Buddha said ‘All life is suffering’, but it is the courage to move beyond it, to ‘travel’ through it, if you like, is the core of all our human stories from the time of Homer and his ‘Odyssey’.
I like wide landscapes, hard choices and people finding ways to live their lives with love and generosity of spirit in the midst of so many things that bring fear and rage into their lives. In the end, I am an optimist and my books reflect that. I believe in karma – not something that is a kind of airy-fairy ‘energy’, but in the karma of difficult, usually frightening choices, with all their consequences. Perhaps we cannot escape the Moirai and the strings of our fate, but we can choose within their web to keep fighting for love and hope. That belief is the core of my fiction.
I write about those who have, as Tennyson said, ‘become a name for roaming with a hungry heart’. In the end, we are all doing that, and those are our myriad stories, even if we never find a way to – or never want to - leave our hometown.

I am a freelance writer and television producer based in Johannesburg. I work all over Africa for a number of international networks including CNN, the BBC, ARD, ZDF, and a number of others.
I am the author of six books.
The House of War A love story and thriller about searching for the lost diaries of Alexander the Great in the badlands of northern Afghanistan while being hunted by Al Qaeda. will be published by Penguin in 2009
The King’s Shilling. A novel about WWI in East Africa published by Jacana in April 2005. It has been on the bestseller lists in Johannesburg, Cape Town and Durban and was long-listed for the Sunday Times Fiction Award in 2006
Deadlines From the Edge: Images of War from Congo to Afghanistan. Stories about working as television news producer in different parts of Africa, the Middle East and Afghanistan. It was published in 2003 by Penguin SA. Now republished by Mousehand on POD and available at Amazon, Kalahari etc.

True North; African Roads Less Travelled is a non-fiction account of my work as a journalist in Africa. It was published in 1995 by William Waterman in Johannesburg. It was nominated for the 1995 Sunday Times Alan Paton Award. Now also republished by Mousehand on POD and available at Amazon, Kalahari etc
A children’s picture book I wrote, The Quagga’s Secret, published by Gecko Books in Durban was selected as one of the ‘1995 South African Books of the Year’ by Jay Heale of Bookchat. In 1999 it was selected by Cambridge University Press in South Africa for inclusion in an English anthology of South African writing that is distributed nationally.
I also am the co-author of a young adult novel, Msimangu’s Words, which was published by Maskew Miller Longman and was a finalist in the Young Africa Award 1992.
I have also written a number of radio features for the BBC, including regular contributions to From Our Own Correspondent on Radio 4. I am also a regular columnist in The Star.

My articles have appeared in many international and South African newspapers and magazines. Including National Geographic Traveler, GQ, The Chicago Tribune, Maclean’s Magazine in Canada, The New Zealand Herald, The Star, The Sunday Times, The Sunday Independent, Business Day in Johannesburg and many others.
***
Thank you very much Hamilton for indulging me and chatting to us about House of War. I look forward to indulging in a copy! I've also popped by Amazon and they have several of Hamilton's books in stock.
Who wrote this? Liz at 8:50 am