No Way Out by Gene Kemp 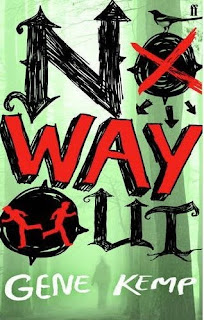 Synopsis:
Alex is my twin. We're not identical or anything. But something holds us together even when we argue and fight - something secret. We're telepathic. And I can hear him now. 'We're prisoners, Adam'. It was supposed to be a normal family holiday. Nothing to report, apart from the usual bickering. But this is different. This town is weird, with its time-warp houses and zombie inhabitants. Worst of all, no matter which way we run, there's no way out. The people are closing in. Now they're after our sister, sweet little Emmy. We've got to save her - from the chanting, the madness and from the ancient curse.
This snack-sized book arrived from Faber Kids and I quickly read through it in one sitting. Clocking in at a mere 108 pages I have to admit to feeling cheated: the story has incredible scope but it all feels like it was written in a great rush and the ending didn't satisfy.
I really didn't get to know Adam or Alex very well - Alex came across as obnoxious and irritating whereas Adam was his complete opposite and almost too nice to believe. When their car breaks down in the middle of nowhere it's the boys who slowly realise that things aren't quite what they seem once they stumble across a very medieval-type village. The parents seem truly dim and plodding whereas the disabled and mentally undeveloped Emmy's character is never fully realised and she's used as a plot device instead of a real character.
I feel sad that I didn't enjoy No Way Out as much as I should have - it is a tremendous premise but it lacks something. I'm inclined to say that maybe it lacks more words, a more elaborate set-up and execution and better character development. It's a bad thing when you put a book down and feel like you've missed something. I've re-read it just to make sure that I'm not being unfairly harsh and I have to say that it's not something I enjoyed or would recommend to others.
No Way Out by Gene Kemp is published by Faber & Faber on March 4th.
Who wrote this? Liz at 7:48 am

Thanks for the review, though I'll give this one a miss.

aw, sorry it wasn't that good. I do love the cover, but I hate books that are short but don't work.

I don't know if you entered the Holey Donuts giveaway or not, but if you could check out this post and do so for my blog, it would mean a TON for my family and you can enter for the book afterwards too if you wish (White Cat by Holly Black ARC)!: