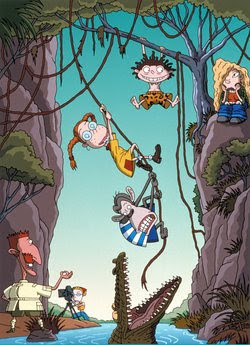 (illustration from The Wild Thornberrys)
Mark and I arrived ridiculously early this morning back in London. There was no traffic and the taxi took a mere 50 mins to travel from Heathrow back to Kent. How good is that? And he wasn't even going fast - it was a leisurely cruise, setting the day up for us quite nicely.
We took the day off to download our photos (lots of them) opening stacks of book parcels, cuddling the dog, doing clothes washing, going shopping for supplies for the house, and generally just relaxing after 24 hours of travel.
Our holiday has been one of the best we've had in a long old time. I forget how beautiful South Africa can be and how generous and kind it's inhabitants. I am looking forward to going back in maybe 2012. This time - we've been thinking about it - spending a longer time at the Kruger / similar nature reserve, maybe even travelling to Namibia to go to the Etosha. I feel wildly invigorated and can't wait to start putting down my thoughts on screen. I have an entire moleskine filled with words, sights, scents, and sensory images. It was a slap in the face to realise this had been on my doorstep all my life but because it was so expensive as a "local" it was not ever something my parents entertained doing with us kids.
Meeting up with family and friends both in Johannesburg and Cape Town was equally amazing. I met great nieces and nephews I'd never met before. Mark met his niece and nephew for the first time too.
I probably spent way too much money but I keep thinking to myself: buy local, help the economy. So I hope the bit I did spend both in the Kruger and in Cape Town helped...and that's my excuse and I'm sticking to it. *shows off the shinies she now owns*
We came home to some gorgeous books. I am very much looking forward to indulging in the next few weeks.
I also bought some books over in SA. The first one I'm really excited about:
Alexander McCall Smith's Folktales from Africa (kid's book published by CanonGate)
and
A Game Ranger Remembers by Bruce Bryden
I realised that when I was younger I read a lot of local non-fiction and local folktales but as an adult I can't remember these stories that I grew up with and I think that's sad, so I'm looking forward to revisiting some much loved books from my past - most of these are in Afrikaans and I doubt they've been translated, but where they have, I will make sure to review them on here.
Not a lot will be going on on the site for a few days, I'll do my best though - we took a lot of books with us to read but were so busy that we didn't really get the chance to laze about and read! I know, am utterly disgusted with myself. So, lots of reading to catch up on! But here are a few pics from our holiday: 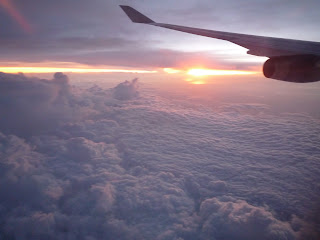 Sunrise over Africa. I couldn't believe this view! 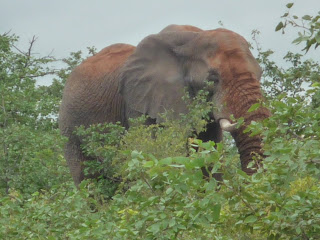 Shortly after arriving at the Kruger National Park we entered through the Phalaborwa Gate and maybe twenty minutes along the road, heading towards our camp, we spotted this male elephant grazing a few metres off the side of the road. We were lucky to see quite a few elephants during our stay, including a breeding herd of maybe thirty females and younger elephants. 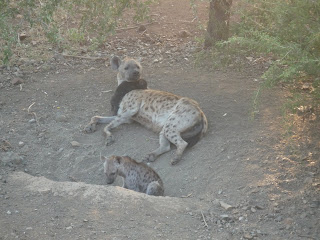 Female hyena with her young cub - so incredibly cute, the cub that is. The mom was very fierce but beautiful. I was shocked by their size - much larger than I thought they'd be - and also incredibly powerfully built. 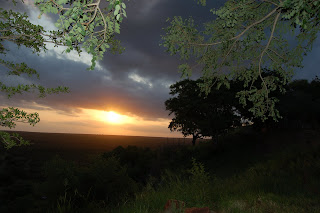 Sunset in the Kruger. Our first night there. We had stupendous views over the valley below us. I took around thirty photos of sunsets and sunrises whilst staying there. 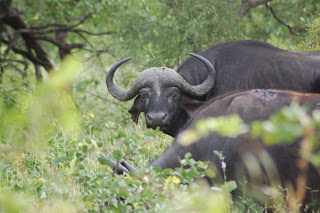 Our last day in the park, as we were travelling to the gate to leave, we came across this giant herd of buffalo, there must have been around a hundred or more of them. An amazing sight. 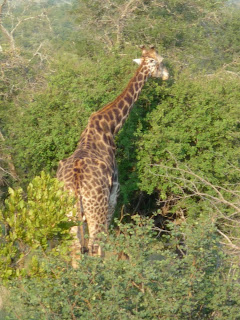 We spotted several giraffes. These animals are HUGE and beautiful. Utterly out of proportion yet stunningly graceful and peaceful to watch. 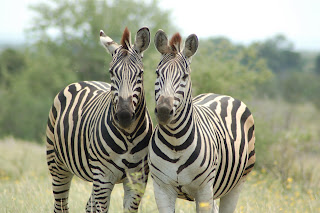 I suspect that zebras are the jokers of the animal world. We sat and watched these guys play around for around twenty minutes. We were struck by how incredibly healthy all the animals in the park appeared and then realised, of course they would look that good - it's the rainy season in the Kruger so they are feeding exceedingly well. 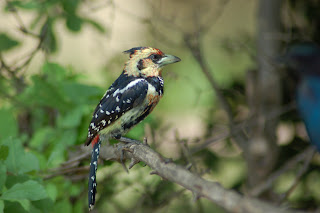 We took a drive down to the Satara rest camp and had lunch there. In front of our car, playing in the water from a running hosepipe, were a plethora of birds. I spotted this handsome lad chirriping away and snuck up on him with my camera. 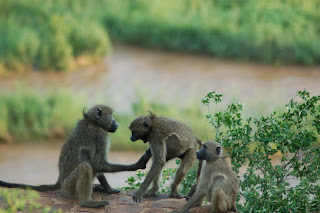 Mark was dozing in the cottage at our rest camp, Olifants, when I heard noises from the front of the verandah. I looked up from where I was writing and spotted an entire troop of juvenile baboons with their "nanny" getting up to all kinds of nonsense. I called out to Mark and he immediately took over photography duty as he was taller than me and could film over the fence that separated the baboons from us. They visited with us for maybe two hours before heading off. 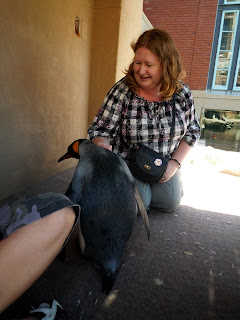 Mark and I got a personalised tour of the Two Oceans Aquarium in Cape Town. Our friend Michelle works there on a volunteer basis. Her enthusiasm is catching and I think we spent around five hours strolling around - we got to go behind the scenes and met the people who make the magic happen. We also got the chance to meet some penguins face to face. Here I am looking nervous as hell whilst cuddling a female King Penguin. Beautiful creatures and very funny too.
I'll be posting more pictures - I did warn you that you'd be bored of photos! - later on this week as I make sense of them.
Who wrote this? Liz at 8:08 pm

Welcome back! It looks(and sounds) like you guys had an amazing trip!

The picture of the African sunrise(and the sunset) was so breathtakingly beautiful it made me want to cry. I'm sure it was amazing to actually see it with your own eyes.