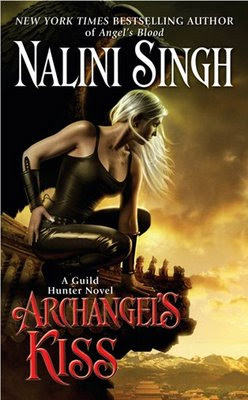 Here is the synopsis from amazon:


Vampire hunter Elena Deveraux wakes from a year-long coma to find that she has become an angel-and that her lover, the stunningly dangerous archangel Raphael, likes having her under his control. But almost immediately, Raphael must ready Elena for a flight to Beijing, to attend a ball thrown by the archangel Lijuan. Ancient and without conscience, Lijuan's power lies with the dead. And she has organized the most perfect and most vicious of welcomes for Elena...


Isn't the cover gorgeous? When I first saw it I was totally blown away. 'Archangel's Kiss' is the second book in Nalini Singh's 'Guild Hunter' series after 'Angel Blood' and came out last week. I spent the beginning of the week checking online every night to see if it had arrived in one of my local book stores. You could say I was eager to read it;D.


I LOVED this book! It starts off days after 'Angel Blood' ends and Elena has to get used to being an angel, retrain her body and learn to fly. She also needs to find a place in Raphael's life as his permanent companion. Most of the other Archangels and Angels see her as a pet, something Elena is not too happy with.

After the death of one of the Archangels (they rule world, each taking care of a territory) one Angel has decided he/she has what it takes to become the next ruling Archangel. And is prepared to show it with twisted mind games and attacks on both Raphael and Elena. Then he/she breaks one of the Angels' most sacred rules, maybe the only line left that they will never cross, and Elena has to hunt in earnest. But will she be strong enough?

The whole way through I was amazed how realistic the characters were. I know they are Archangels, Angels, Vampires and a Vampire Hunter, but the world Nalini has created is totally real. There was nothing I thought was exaggerated or over the top, everything fit together seamlessly.

I really liked how alien and inhuman Raphael was. At no point do you forget that he is an Archangel and has lived for centuries. His cruelty and brutality were sometimes a little hard to take, but really pushed the story forwards. Elena is a great counterpart. She clings to her humanity while at the same time trying to find her place in a very different world.

This book has everything you want: fabulous main and supporting characters, great story, chemistry that jumps off the page and all taking place in a world you can believe in.

I cannot wait for the next book in the series and am desperate to find out how Elena's and Raphael's relationship develops. Nalini's website is here.

Wow! This one I'm going to pick up!