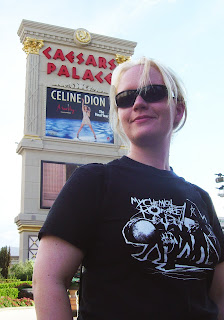 CJ in Vegas, casing the joint
Smug cannot begin to describe the fact that I managed to get an interview with debut novelist: C J Skuse, author of Pretty Bad Things. Having read her answers, I totally now get her characters even more. 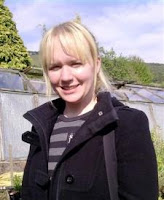 1. Can you introduce yourself to MFB’s readers?

My name is C.J. Skuse. I come from Weston-super-Mare, I’m 29 and I’ve been writing since I was 17. Pretty Bad Things is my first novel for young adults and is being released by Chicken House in March 2010.


2. Is Pretty Bad Things the first novel you’ve ever written?

No, I actually started writing my first novel when I was 17. I sent it out to fifty literary agents, one after the other, and got about fifty straight rejections back during the course of ten years. I wrote another one after that, but they didn’t want that one either, so then I got the hint that maybe my writing was a bit rubbish, so I enrolled at University and did two degrees in creative writing. It wasn’t until I’d graduated that people started to take me seriously. These courses, along with my two previous novel attempts, were the best learning curves, and I really couldn’t have written PBT without them.


3. What was your inspiration for Pretty Bad Things?

So many things inspired PBT! If you’re into movies, you can probably see the film references in there (Bonnie and Clyde, Thelma and Louise, Natural Born Killers, True Romance, in fact any Tarantino movie!) but it’s not compulsory to know these films to enjoy the book. Music was a huge inspiration too. I’m heavily influenced by rock music when I write, specifically New Jersey band My Chemical Romance (fyi this is the only reason the twins come from NJ) so listening to their music really helped draw certain scenes out of me. For Paisley’s more angry moments, I found Slipknot, Linkin Park and Foo Fighters particularly helpful.

I started writing when I was 16/17, so every time I go to write a character now, they are always around that age. I think I am emotionally stuck at 17. I still have the same hang ups, fears and rages I had then and a lot of unsolved angst from around that time too. Because I’m quite a passive person, I guess I invented a character like Paisley to kick ass on my behalf because I just don’t have the courage to, a bit like Beau!

5. Paisley is such a wild yet likeable character – how did you manage to keep her from becoming nasty enough to dislike?

I don’t know if I have kept her from being disliked. She’s one of those people for whom trust doesn’t come easy so her defences are always up, but when you know more about her and what she’s been through, you can understand why. I just hope readers will be able to laugh at the funny parts and relate to her total disregard for authority, and perhaps note those few places where her vulnerability comes through. She’s hard-edged because she’s had to be.


6. In complete contrast we have Beau – the quiet studious one, the voice of reason for most of the book. Was it a conscious decision to write Beau’s character this way?

Yes it was, because Paisley is so full on with everything she says and does, I think you need an antidote to that. Someone to point out that, in fact, what she sometimes says and does is downright ridiculous or just wrong. I’d write a Paisley chapter where she’d just be swearing and complaining and it would be one liner after one liner, and it would be a relief to get to a Beau chapter where I could change down a gear, be a bit more poetic, notice the surroundings a bit more etc. A whole book written in Paisley’s voice would be so frenetic I think it would be too much. Beau acts as the perfect balancer. 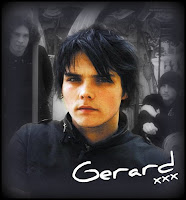 Anyone I say would be way too old if it ever got made into a film but I’d absolutely love Dakota Fanning to play Paisley. Beau, for me, has always been Gerard Way (MCR lead singer) so the dream would be if Gerard Way lost fifteen years and played him because he’s written in his own image. Emile Hirsch (Into the Wild) has always reminded me of Beau too. Failing that, Chris Colfer (Kurt in Glee) and Steven R. McQueen (The Vampire Diaries) both have Beau-like qualities about them.


8. Both Beau and Paisley come with a huge amount of back story. What came first – their back story or their current story?

Back story definitely. I had a lot of time to really research these characters and their home lives (down to the kitchen cabinets they had in their home in Jersey!) because I wasn’t really working to a tight deadline, so I could really build the foundations of who they were. If there is to be a sequel, more of that will come out.


9. Are you a big fan of Las Vegas? I ask as I had this impression whilst reading PBT that I was there, experiencing the noise, the glitz and the heat of the Strip.

I only went there for four days and I wasn’t really a fan until I left it. I found it pretty scary. It was like entering a board game. I gradually came to realise that when you’re there, you just have to play the game, have the experience, and try not to lose all your money.

I re-write. Or I read. And I go to the odd rock concert. That’s pretty much all I’ve ever wanted my life to be until I can afford my dream smallholding in the Lake District. Of late I’ve been Googling Robert Pattinson quite a bit too which takes up a fair bit of time. 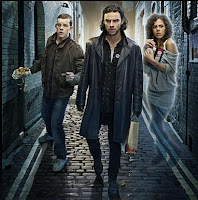 11. What are your favourite TV shows?

At the moment, Glee and Being Human are my appointments-to-view. Anything else I can take or leave. I get sucked in to things like X Factor, I’m a Celebrity…and all of that, because it’s total light relief. I love sitcoms from the 70s onwards too so I’ll always watch an episode if anything’s on, regardless of how many times I’ve seen it before. I also find Robson Green’s Extreme Fishing strangely watchable.


12. Did you have a soundtrack for writing PBT?

Big time! The soundtracks and the movie posters to my books are always worked out before the books are even finished! MCR, Paramore, Slipknot, Linkin Park, Foo Fighters, Biffy Clyro, Kings of Leon etc etc. Music is a huge inspiration for my writing and I could go on for days listing bands and songs that have helped me write particular scenes, but they’re the main ones.

13. Can you hint to us about the follow-up novel to PBT or is it Top Secret at the moment?

I’m working on about three different books at the moment, most namely my second book for Chicken House which is due for release in 2011. I’m always a little hesitant to say too much about it too early in case a sneak steals my idea, but I’ll happily tell you more nearer to publication! I’m also working on a very tentative sequel to PBT, though depending on how well PBT is received, it may never see the light of day. And I’ve also gone back to the book I was writing before PBT to see if I can patch it up, more because it’s just something I need to finish for myself.


14. What are you reading / what do you enjoy reading when you’re not head down writing?

I like YA books. I can relate more to teenage characters than I can to adult ones. I loved the Twilight books and I’ve just finished reading all the Harry Potters straight through, which I thought were incredible. I like Christopher Moore, Kevin Brooks, J.D Salinger, Stephen King, those kind of geniuses. I read graphic novels and comics as well. My New Year’s resolution was to read more classic novels, so I’ve started with the Narnia books and To Kill a Mockingbird. I’m gearing myself up for Charles Dickens too.


15. Any advice for young aspiring authors?

There’s no point doggedly sending your work out to agents and publishers if it’s not as good as it can possibly be, so I would recommend anyone truly serious about getting published (if they can afford it) to do a creative writing degree and preferably an MA in Creative Writing. Your writing will improve ten times over I guarantee it and you’ll meet some incredible people and make good contacts too. It’s the best thing I ever did and I would definitely not be published now without it.

So, as a superfast competition, one lucky person gets the opportunity to win my finished (and unread) copy of Pretty Bad Things before it's release in March 2010. I'm letting this run until Sunday, 28th Feb. I'll announce the winner AND post the book out to said winner on Monday, 1st March.

Tell MFB who would be your perfect partner in crime (famous or non-famous) and why. The winning comment will be twittered and you'll receive the tidy copy of PBD to read at your leisure. The competition is open to UK peeps only as I'm paying postage. Random.org will choose the winner!
Who wrote this? Liz at 8:15 am

Too late for your competition - I got onto Amazon and ordered this as soon as I read your review the other day. It sounds great and I can't wait for my copy to arrive.

Al Pacino. He must have learned something from his roles in The Godfather and Dog Day Afternoon!

Oooh, I waaay missed your competition but I loved reading this interview because I've really been looking forward to this book since seeing it in the publisher's newsletter...glad you had the interview, too because I found your blog!

Now to find a way to get the book in the US!

I just read Pretty Bad Things, and loved it. Since I remembered reading this interview a while back I thought I'd swing back by and reread. I'm now absolutely excited by the thought of a PBT sequel. I love the thought of revisiting those characters again.