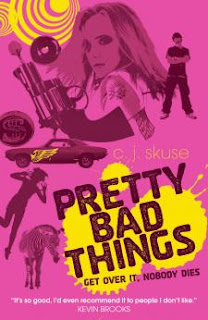 When they were six, twins Paisley and Beau Argent made the headlines. They were the “wonder twins”, found alive in woods after three days missing– spent looking for their dad. But now at sixteen, life’s not so wonderful. Lied to by their money-grabbing grandmother they’re still clueless about their dad’s whereabouts. Until they find an old letter. That’s when they decide to hit the road – and make headlines again. Holding up candy stores in Las Vegas might be extreme but if they can get on the news, and tell their dad they need him, they might get the reunion they never thought could happen.
**please note, there are some slight spoilers further below in this review, but none should detract from the awesomeness of this book**
I read Pretty Bad Things in maybe four hours, maybe a bit less. Not because it’s lightweight. To the contrary: PBT is a wild ride and the story has these chunky boots that climb into your head, with its hang-ups, attitude, sass and all.

At the age of six Paisley and her brother Beau became famous overnight. They survived for three days, on their own in the forest, eating a packet of sweets Paisley had in her pocket. Their mother had just died from an overdose of drink and drugs and there’s still no sign of their dad. Well, it turns out that good old dad did something really silly: he decided to try and rob a well known establishment and got nicked for it, sent to jail.

So the twins got to grow up with their ruthless and grasping grandmother who toured them around tv shows and radio stations, letting them tell their stories over and over again. Meanwhile the money came rolling in to secure their future.

But it doesn’t end there. In fact, it’s just the start of an amazing story that had me alternatively sobbing / shouting with joy, into a tissue on the 73 bus.

Paisley is the girl most of us wish we could have been at school. The wild child. The destructive one. The one you were a little bit afraid of but admired nonetheless. She’s got an awful relationship with her grandmother (affectionately known as the Skankmother) and has been sent to be educated at a variety of boarding schools after it transpired that she could not be controlled. She got herself tossed out of four or five different schools for a variety of reasons. She is on her way to the loony bin if she doesn’t watch her step.

From the above description you may think “why the hell would I care about such a monstrous child?” and the honest answer is: Paisley’s voice. You can easily appreciate exactly where she comes from. As the more dominant one of the twins, she’s the one who took care of them in the forest when they got lost. She’s the one that stood up to her mother when her mother beat her and Beau and put them in the basement or locked them in cupboards whilst going on a drinking binge. Paisley and Beau have not had pretty lives.

Paisley managed to escape to a certain extent, with her grandmother paying for her to be educated elsewhere, where she would be less inclined to influence Beau. It’s hard on the twins. Beau acts as the voice of reason in their relationship. He’s steady but scared of his grandmother and would rather do her bidding than rock the boat.
When Beau discovers an entire box full of letters from his father which had been hidden from them, he sits down to read them all; ten years worth of letters. The most recent letter is a revelation. Their father is just up the road in Las Vegas! Beau sends Paisley a letter which completely takes the wind from Paisley’s sails: her father is alive, out of jail and he is living in Las Vegas.

She beats up another girl in school to secure her expulsion and flies to California where she rescues Beau from her grandmother’s house and together they embark on an adventure the likes of which America’s not seen since Bonnie and Clyde/Thelma and Louise.

After fruitlessly searching Las Vegas, with no sign of their dad, Paisley comes up with this idea to steal sweets from various sweet and candy shops dotted all around Las Vegas. The reasoning is: their exploits would no doubt go up on the large external tv screens that line the streets and this would mean that their dad would know that they were around and try to find them.

It’s an insane plan and one that works, eventually, and then stunningly well. With each robbery their fame grows. Different factions form – those who are Team Paisley and Team Beau – and they garner a huge following online. Their most dedicated fans realise there is definitely something behind them holding up these candy shops. The media goes mad, they can’t believe that America’s sweethearts from ten years ago have turned into villains – robbing shops and creating all kinds of chaos. They search for the twins’ grandmother who runs around giving various heartbreaking interviews about how she’s tried to control them but all they ever did was break her heart, steal her things and burn down her house.

Most poignant for me was when the twins had the opportunity to go online and check out these forums that had been set up on their behalf. How people and kids identified with them, what they were doing (even if it was a bit villainous) and how they rooted for them because it would mean that if Paisley and Beau could get their dream fulfilled of being reunited with their dad, anything could happen for anyone else. Beau and Paisley were living the lives many kids were too scared to live for themselves. They identified with the twins and it meant that their fanbase just keeps growing and growing. And it’s not just kids. It’s adults too. Soon the twins are almost too famous to pull off any robberies. They become victims of their own fame.

Beau and Paisley become true anti-heroes. Their actions become wilder and wilder. Yet they aren’t purposefully malicious. Just clever and desperate to find their dad and they are prepared to do almost anything to realise their dream. Add to that their psychotic grandmother who has machinations of her own and a will as stubborn as Paisley’s and you just know you’re heading for a disaster of some sort.

Pretty Bad Things will raise several eyebrows once it’s released. Some people are bound to be upset by the language, the way Beau and Paisley go about trying to find their dad, the blatant references to sex and drugs (and rock n roll) but for those who can take this in their stride, and see past the brazenness of the characters, you’ll be swept off your feet, rooting for these two amazingly real and honest characters.

I can’t recommend Pretty Bad Things enough – it is definitely for a slightly older audience, fifteen upwards or for younger mature readers who won’t be cowed by the characters or their actions. And to be honest, I’m pretty sure that a lot of adults / older readers, will easily be able to identify with the characters and appreciate the breathless quality of the writing as they rocket around Las Vegas on their quest.

This is CJ Skuse’s first novel and it’s being published by ChickenHouse. Find the Facebook page for Pretty Bad Things here.
Who wrote this? Liz at 8:59 am

A really interesting review. It sounds action-packed but I just don't know if I will enjoy it. I think this is a UK debut so I may read it just for that reason in the end. I don't know if I'm into anti-heroes. I'm more your superman / spiderman type of girl.