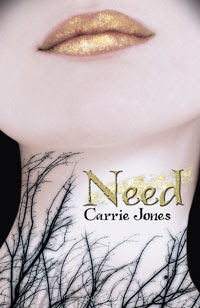 Sarah Bryars has kindly offered to review Need by Carrie Jones for MFB. I am very pleased that she did because it's a fab novel, one I raved about madly last year when I bought the hardcover in from the States. Now it's come to the UK, thanks to Bloomsbury, and I can't be a happier fan-girl. Here you go, Sarah's review:
Synopsis
Following the death of her beloved stepfather, Zara is forced to leave Charleston and her mother to live with her grandmother, Betty, in Maine. The move is bad enough, but when Zara realises she has been followed across the country by a strange man, things get even worse. Local boys are disappearing, she hears a voice calling her name in the night, mysterious figures seem to flit in and out of the shadows of the forest, and Zara’s sure her mother and Betty are hiding something from her. Life is made a little easier by new-found friends Issie and Devyn, and possible love interest Nick, but even they are keeping secrets from her.

The blurb on the back of this suggests that Need is a kind of mash-up of Stephen King and Stephenie Meyer which made me raise an eyebrow. Part way through I changed my mind; it’s true! Need has an atmospheric, almost hypnotic quality to it which I wasn’t expecting. Added to that is a growing feeling of unease and dread. Zara is sent to her grandmother’s house when her mum finds her behaviour after the death of her stepfather worrying. Once there she finds the lifestyle a complete culture shock; the weather, the clothes and the sense of isolation all make her wish she could go home.
The tension soon ramps up as she sees a man, pointing at her from the side of the road. She recognises him as the same one she saw on the way to the airport. Once at her grandmother’s she sees him again and when she leaps out of the car to see where he went all that’s left is a trail of glitter. Zara uses phobias as a coping mechanism, she chants them to herself in times of stress and each chapter starts with a different phobia which is a nice touch. Her first days at school see her making new friends and enemies; Issie and Devyn are sweet characters. I started to warm to Zara as her relationship with Issie developed. Nick is also an intriguing character; throughout the book I was first for him then unsure of his motives. As a whole, the supporting characters are both entertaining and intriguing – they add to the growing mystery.
Zara discovers that the problem with Maine is pixies added to which boys are going missing. The deeper that Zara gets into the problem the more creepy it becomes. The pixies in Need are much like the fairies in Wicked Lovely, just plain nasty at times. As the snow begins to fall and the sense of isolation and danger increases I was whipping through the pages to find out what was going to happen! Without giving away too much of the story, pixies aren’t the only things that Zara has to deal with. The mother/daughter relationship was really well handled too, the distance that had grown between them was caused by secrets which slowly unravel. The tight band of grief that is strangling Zara slowly starts to loosen in Maine. She starts to open up and she allows little bits of information to slip out which start to put the jigsaw together.
The ending was quirky enough to make me want the sequel. In fact, it’s the sort of ending that plays on your mind a bit. I kept thinking, “Well, what’s going to happen with that?” To sum up, Need has enough to offer which is different to make this series gripping. For me, there can never be too many supernatural beings anyway, so there’s more to love!
Need is out now from Bloomsbury UK and the sequel will very soon be with us!
Who wrote this? Liz at 8:19 am

Thanks! I'm really looking forward to the sequel now.