After my review yesterday of Into the Woods, here then is the guest blog by author and arts reviewer, Lyn Gardner - she wot wrote Into the Woods. We are very fond of fairy tales here on MFB, reworked ones, ones made into movies and ones that can be told and retold. Which is why it is such a pleasure reading this guest blog. I hope you enjoy it too!
** 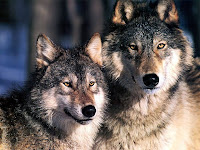 *picture taken from First People Website
I’ve always loved a wolf. From Little Red Riding Hood to a well thumbed copy of Russian folk tales and Joan Aitkin’s thrilling The Wolves of Willoughby Chase, my childhood reading was full of wolves. So perhaps it was inevitable that when I began to write my first novel, Into the Woods, I knew that it would feature wolves.

Not, of course, that I immediately realised that I was writing a novel. There had already been too many half-hearted attempts to start that had petered out after the first couple of thousand words to really imagine that I might ever finish a book.

I first wrote about Storm Eden, and her housework-mad sister Aurora and baby sister Any (short for Anything) encountering wolves in the woods around their home, Eden End, while sitting on Bristol railway station late one winter’s night. It was freezing cold, the last train back to London had been delayed by over an hour and it had began to snow. Perhaps it was the snow that made me think of wolves.

At that stage I only had the vaguest of idea of who these sisters were (although I knew that Storm with her red hair was brave, reckless and stormy, like her name) and I didn’t know why they were being chased by wolves. The Pied Piper figure, the wicked Dr DeWilde, only began to take shape later, rising like a spectre from folk-lore and half remembered stories and nightmares. But on that deserted railway platform close to midnight, the sisters suddenly started to come alive on a sheet of A4 paper as they tried to desperately avoid being eaten by wolves. The section of the story I wrote in pencil that night eventually made it into the published version of Into the Woods pretty well intact, and although by that time it wasn’t the beginning of the story, it always felt as if it was close to its dark heart. 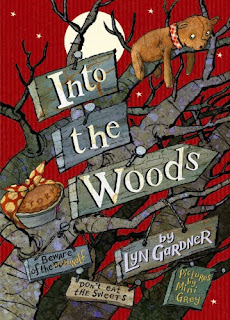 Perhaps from wolves it was always going to be a short leap to fairytales. But the re-imagined fairytale format also provided a useful crutch for a fledgling writer who didn’t have much confidence in her own ability to come up with strong narrative ideas. The stories I’d made up at bedtime for my own daughters frequently used fairytale templates, and as an arts journalist on the Guardian I had often written about the hold of fairytales and myth on our imaginations from Beauty and the Beast to JM Barrie’s terrible masterpiece, Peter Pan.

Using fairytales allowed me to build on what I had already began, and without them that first scene of the sisters escaping from the woods may have joined all those others scribbled pages of novels began, but never continued or finished, in the waste paper bin. But a few months later as we were setting off on a family holiday to visit our American cousins I came across the scene in the woods with the wolves and vowed to take it with me. My daughters (then seven and 11) had long pestered me to write a children’s novel, and I told them that during the holiday I would write them a chapter every night and read it aloud at bedtime to them and their cousins who ranged in age from 10 to 14.

It was a brilliant way to really kick-start a first novel. Not only did I have around 15,000 handwritten words on our return to England, but I’d also had something that money can’t buy any writer: a captive audience of children in the age range for whom you are writing to try your book out on as you are in the very act of writing it. I soon got a real sense of what held their attention and what didn’t, the jokes they laughed at and the ones that fell flat, and I suspect it’s no accident, given Into the Wood’s oral origins, that so many parents and teachers have since told me how well the novel reads aloud. 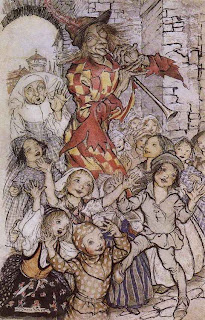 The hard graft, of course, began on my return to London. Like a lot of would-be authors I liked the idea of being writer more than I enjoyed actually the prospect of sitting in front of a computer screen and putting words into sentences that eventually become paragraphs and chapters. As the number of words began to grow, I suddenly dared to imagine that for the first time in my life I was actually going to finish a book. Continuing to read what I had written aloud to my children really helped, and I had a real boost after sending off the first 25,000 words to an agent, Rosemary Canter at United Agents (then PFD) who was hugely enthusiastic and told me to hurry up and finish it by Christmas. After that, the more I wrote, the easier it became to write, as the story and the characters took on a life of their own almost rolling out in front of my eyes like a movie as the sisters crossed glaciers, fell down mine shafts, took part in spelling contests and defeated the wily Dr DeWilde.

I wanted to show the girls taking risks, breaking rules and having real adventures while celebrating the ups and downs of sisterhood and family life and relationships. As a sister of sisters and the mother of daughters I felt it was something that I knew about, and one of the pleasures of being a published author (which I can still hardly believe) has been the fan letters I’ve received about Into the Woods, and its sequel Out of the Woods, not just from children in the 8-12 age range but from their elder sisters and mothers too saying that they recognize its portrait of siblings.
**
Thanks so much to Lyn for stopping by! Now if reading this article and my reviews (which are ace!) don't want to make you pick up reading these two books, I don't know what will. Stop by tomorrow for my review of Out of the Woods and a cracking chance to win these two books.
Who wrote this? Liz at 8:33 am

Great guest post. Thanks Lyn & Liz. I can really relate it to the book :D

I really need a good review of this book and and i found it. Thanks. Did you read all these books?