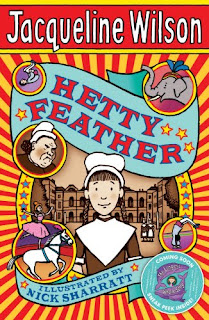 London, 1876 and Hetty Feather is just a tiny baby when her mother leaves her at the Foundling Hospital. The Hospital cares for abandoned children – but Hetty must first live with a foster family until she is big enough to go to school.

Life in the countryside is hard but with her ‘brothers’ Jem and Gideon, she helps in the fields and plays imaginary games. Together they sneak off to visit the travelling circus and Hetty is mesmerised by the show, especially Madame Adeline and her performing horses.

But Hetty’s happiness is threatened once more when she is returned to the Foundling Hospital. The new life of awful uniforms and terrible food is a struggle for her. But now she has the chance to find her real mother. Could she really be the wonderful Madame Adeline? Or will Hetty find the truth is even more surprising?


I'm ashamed to say I've never read a Jacqueline Wilson book even though they are regularly being borrowed from the library where I work. When I saw that Hetty Feather had just been released in paperback I couldn't resist grabbing a copy. I was intrigued by this new title as it's a bit of a departure for the author being an historical novel. A day later and I was finished, absolutely transfixed by this wonderful tale.

We first meet Hetty at the moment she is given up by her mother at the Foundling Hospital. From the first line Hetty's voice is so strong that she grabbed my attention and what was supposed to be a quick five minutes reading the first few pages became a half hour, then an hour. She's transported off to the country with another baby, Gideon, to be looked after by a foster mother. Initially I thought that Hetty had been incredibly lucky. She has a wonderful foster mother and father alongside their children and foster children. Hetty's favourite is Jem and she forms a strong and touching bond with him. However, gradually the older foster children reach the age of six - the age when they must return to the Foundling Hospital and begin their education. Soon Hetty and Gideon are six too and must make the long journey back to London. Jem, who has promised Hetty that when she's old enough they'll get married, travels partway and say goodbye at the station. At this point I shed a tear, the scene is so heartrending and awful.

I knew that Hetty's return to the hospital would be terrible, and it is. However, Hetty's spirit means that she doesn't invite the reader to wallow or feel pity for her. It's so heartbreaking though to see her have her clothes and doll thrown away and her hair cut off. The more the hospital tries to remove her identity the more determined Hetty becomes to cling to it. She promises herself that she won't forget her home in the country, Jem and her foster mother. The hospital's aim is to educate, feed and house unwanted children with the hope that they'll eventually find a position as a servant. From the very beginning Hetty is determined that she won't go into service, that there must be more for her in the future.

Hetty Feather is a wonderful book. Hetty's search for identity is enthralling and I loved the part where she decides that Madame Adeline from the circus is her mother. Years later she finds Madame Adeline again, the way that the author describes their meeting is so bittersweet. I part expected Madame Adeline to refuse to speak to Hetty but she's kind and caring. I could go on and on about great scenes from this book, about how the harsh realism of living in the Victorian age is brought to life through the eyes of a child. The ending is incredibly satisfying too, just perfect.

To be honest I didn't feel like I was reading a book for younger readers. A great tale, spun with love and attention to detail, can be enjoyed by any age group. I know I should really donate this to the library but I'm very tempted to keep it for myself.
Who wrote this? Essjay at 8:00 am

I thoroughly agree - it has a mature simplicity I really enjoyed. Several of my Chatterbooks group cite it as a favourite book, too.