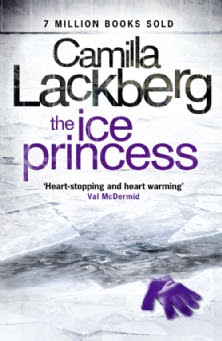 The writer Erica Falck has returned to her home town on the death of her parents, but discovers the community in turmoil. A close childhood friend, Alex, has been found dead. Her wrists have been slashed, and her body is frozen solid in a bath that has turned to ice. Erica decides to write a memoir about the charismatic but withdrawn Alex, more as a means of overcoming her own writer’s block than solving the mystery of Alex's death. But Erica finds that her interest in Alex is becoming almost obsessive. She begins to work with local detective Patrik Hedstrom, and the duo soon find that some unpleasant secrets are buried beneath the comfortable surface of the town.

I've heard some great things on Twitter and the blogosphere of Camilla Lackberg and thought I'd give The Ice Princess a try, buying myself a copy during my annual December book blowouts.

The story starts with an elderly man finding the frozen body of a young woman in her parents' home and unfurls slowly from there, with the main character Erica, reluctantly taking the an interest in it, as she knew Alex growing up and remembers what a vital and interesting and fun girl her friend had been in the past.

As Erica investigates the story it meanders along here and there which really wasn't what bothered me as I am pretty good with meandering books and liked the characterisation. As we slowly but surely learn more about who Alex was, a complex character, to the different people in her life, you start feeling a bit uncomfortable at some of the revelations. Nothing, we soon learn, is what it appears to be and for a community as small as the town they grew up to keep secrets for this long is quite unpleasant.

Characterisation is good and the settings are well described, along with the cold climate. I think it also helped reading it whilst the weather was turning colder. But sadly I didn't enjoy The Ice Princess all that much. Mostly because the writing felt stilted and jagged. I also had issues with the overly formal dialogue which I can appreciate as part of the scene setting, but it just didn't ring true. And for the life of me, I can't tell if the jagged writing had to do with actual writing (originally in Scandinavian)| or the translation into English. I put the book down several times thinking I need fresh eyes, came back to it and then in the end finished it out of a feeling of duty rather than enjoyment.

Do look around at other reviews though - I enjoyed Karen's review over at Eurocrime - and make up your mind about buying this in. Sadly, it didn't work for me, but it won't stop me from reading more Scandi Crime or more of Camilla Lackberg's books, because that would be silly. The Ice Princess is published by Harper Collins here in the UK and here's a link to the other books Ms. Lackberg has written that's currently available.
Who wrote this? Liz at 9:30 am

Really interesting review. I've found mixed success in reading Scandinavian crime novels in the last couple of years and I always wonder whether it's down to the translation or the original writing style too.

The synopsis of Ice Princess made excited all the more. I'm kind of a scaredy cat when it comes to thriller books and such but I think its story and the entirety of it is what draws me to it.

I did quite enjoy this book, but totally agree with your reservations about the writing style. It did sometimes feel over-formal, and also just sometimes very clunky.

I had the same thoughts as you about whether things had been lost in translation, but the Läckberg books are translated by Steven Murray, who also did the Stieg Larsson Millennium trilogy - and there's nothing wrong with them!