In black vans and under cover of night, they descend on the little Mexican town of Tierra Rota, abducting its women and returning them days later like broken dolls. And no one can stop them. That is, until one brave soul approaches Frank Castle with his heart in one hand and a bag full of money in the other.


Now Frank's no bounty hunter, and definitely no hero, but there are some things the Punisher just can't abide..

I've been a Punisher fan for a long time; I've never really gotten comfortable with the spandex and eye-laser brigade.  The likes of Judge Dredd, Batman and Frank Castle, aka the Punisher, have always been my comic book heroes. But, truth be told, Mr Castle and I had a bit of a falling out a few years back after some storylines strayed into silly territory and put me off. Then a quiet conversation at a signing at Orbital Comics steered my towards Garth Ennis' Punisher Max series and all was forgiven. It was a real running-towards-each-other-in-a-meadow kind of moment and I haven't looked back yet.

So naturally, when I find myself opening a Punisher by a artist or writer I've not read before, it's with the kind of expression usually reserved for new fathers changing their first nappy.

The thing you notice about the trade paperback of GIWD is that the style of the cover art bears no resemblance to the dark, brooding menace that Laurence Campbell's stylish mastery of shadows evokes within. It's the perfect match to Greg Hurwitz's tight, almost spartan, but nonetheless eloquent script and they mesh smoothly, letting the story breathe and develop, even when nothing is being said. The colouring is also spot on- the muted shades used complement and emphasise the sharp contrasts of Campbell's art. And thus, saving myself a thousand words: 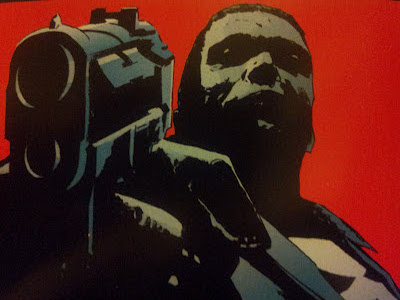 Their Punisher is a dark and almost elemental presence, haunted by his memories and the knowledge that the war he has chosen to fight is without end. There are no pithy one-liners or outrageous heroics here, just a methodical and pitiless tightening of the noose. Given the fallout of the gang wars coming out of Mexico on a depressingly regular basis, there's really no other way it should be played. It's as violent and gritty as I want my Punisher to be, but more than that it's the look 'behind the curtains' into the reservoir of simmering rage that drives Frank Castle, and the fallout when the lines in his black-and-white, good-vs-evil universe blur. It's that connection, that glimpse of the man behind the skull that lifts GIWD to something special and has earned it a pride of place on my shelves. Most awesome indeed.

It's the second time I've coem across Greg Hurwitz's name in the past couple of days. He was at the Theakston's Old Peculier Crime Writing Festival this weekend :)