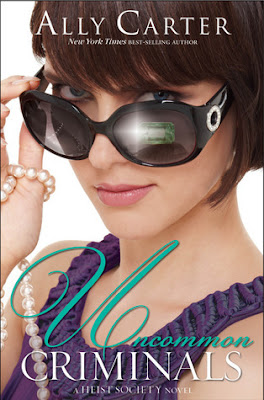 Katarina Bishop has worn a lot of labels in her short life. Friend. Niece. Daughter. Thief.  But for the last two months she’s simply been known as the girl who ran the crew that robbed the greatest museum in the world. That’s why Kat isn’t surprised when she’s asked to steal the infamous Cleopatra Emerald so it can be returned to its rightful owners.


There are only three problems.  First, the gem hasn’t been seen in public in thirty years.  Second, since the fall of the Egyptian empire and the suicide of Cleopatra, no one who holds the emerald keeps it for long, and in Kat’s world, history almost always repeats itself.  But it’s the third problem that makes Kat’s crew the most nervous and that is simply… the emerald is cursed.


Kat might be in way over her head, but she’s not going down without a fight. After all she has her best friend—the gorgeous Hale—and the rest of her crew with her as they chase the Cleopatra around the globe, dodging curses, realizing that the same tricks and cons her family has used for centuries are useless this time.


Which means, this time, Katarina Bishop is making up her own rules.

I have so much love for Ally Carter's Heist Society novels.  This is the second novel in what I hope will be a multiple-book series.

The above write-up pretty much tells you the set-up.  I was shocked to find the thieving nearly done before we were halfway through the book...I thought: what the hell, Ally? What's the rest of the story going to be about? See, the previous Heist Society took practically the entire book for them to break into the museum and steal the painting and see the end of their nightmare situation.  In Uncommon Criminals, we see them do the deed pretty swiftly and it left me wondering...but then, Ally being Ally and a sneaky writer, pulls the rug from under her readers and more importantly, Kat, and hey presto, the con is on, again.

The thing that makes Katarina Bishop such a great character is how much internal conflict she has.  She comes from an entire family of thieves and con artists.  She wants to be a normal girl, but nothing about her is normal.  No one in her life allows her to be normal - she is a product of the society she's grown up in.  And even if she's trying to fool herself into thinking that she's being a thief for the good, a thief is still a thief.  Married with this internal conflict, is the feelings she has for the lovely Hale.  I love how strong Hale is, how completely competent and how he seems to have his very own story and it might not be the happiest of stories.  It is so easy to see how the two of them should fit together, yet there are obstacles, mostly of their own making.

Happy sigh. And lets not forget the actual conning and thieving.  It's handled really well, with a deft touch by Ms. Carter and we are left wondering "will this work?" and what I like the most is the way the plans come together and how quick they are to improvise and do clever things.

This isn't a long review.  It doesn't need to be.  If you've read any of Ally's books, you'll know she's a great writer.  If you haven't, give it a whirl.  Her Gallagher books are hugely popular for younger teen readers whereas Heist Society is maybe aimed for a bit older.  Also, I'd hasten to add, it's a great book to hand over to boys who like reading - hopefully the cover won't make them run a mile, but let me just say: if I were a boy, I'd want Kat on my team when it comes to planning logistics for an invasion. She has plans for her plans.

My only regret is reading this so quickly - because it's a very very long wait until the next book - 5th February 2013 which just so happens to be my birthday.  *pointed look*

However, you lucky bunch of readers, here's a link to the opening chapter of Uncommon Criminals.

I still haven't read the first one yet. *wails* And you recommended it to me! I will read it, I promise. It sounds so good!

I love these books so much and can't wait for the next book, which looks like it will have so many yummy Hale scenes!