The Bleeding Land by Giles Kristian 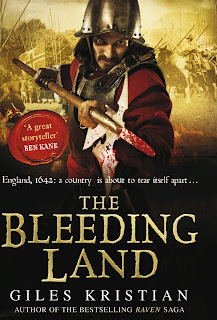 England is at war with itself. King Charles and Parliament each gather soldiers to their banners. Across the land men prepare to fight for their religious and political ideals.
Civil war has begun. A war that will rip families asunder and change everything.

You know, if learning about things you were generally clueless about was always this much fun, the world might be a shinier place than it is right now. Sadly, that’s not going to happen, but at least history stands a chance with writers like this championing it.
I’ll freely admit that what I knew about the English civil war before opening The Bleeding Land could have been jotted down on the back of a postage stamp. It wasn’t on our school curriculum other than in a passing mention; two, perhaps three sentences to sum up such a bitter conflict. So I opened the covers with equal parts anticipation and trepidation- the last thing I wanted to find lurking in there was a political thriller. Intrigue, innuendo and the thousand possible meanings of a smouldering stare are wasted on me.
I really should've known better.
There’s a line from a Marilyn Manson ditty that goes ‘the death of one is a tragedy, but the death of millions is a statistic’ – it’s an insidious but undeniable truth. The reality of war loses its sting when it’s rendered down into faceless numbers. The battle of Stalingrad saw at least 1,970,600 casualties. It’s just a number you skim over. But each one of those was a life, each with its own story and The Bleeding Land, while set in a time of epic conflict, isn’t about the numbers. Far from it. It’s about a family caught up in that conflict, about the awful decisions they’re forced to make as the world they know crumbles around them and allegiances, both old and new, become matters to fight -or die- for. It’s about the all too real complexities and emotional toll of trying to balance heart against mind. And it was that solid grounding, combined with well realised characters which drew me in and made me care and coloured every single action sequence with tension.
The story centres on the fate of Edmund and Tom Rivers as they are drawn into the gritty, sordid reality of that war, and the consequences of the decisions that set them on different paths. Paths that you know are destined to collide and most likely with tragic results. Anyone who’s read Giles’ Raven series (and if you haven’t , you should, asap) will know how good he is at bringing his characters to life, and TBL proves no exception.  The mad heroism is scaled back, and the pace is a steady one rather than the headlong rush of that series, but TBL is a different animal and the story benefits from it. The scope, research and smooth delivery that made Raven impossible to either ignore or put down shines through again, vividly evoking the chaos of battle and bloody glory of the age in with a definite and unmistakeable energy.
Marvellous stuff all round.
Buy it! Read it!

You can read our wee interview with Giles here, visit his website here or watch the amazing trailer: