The Iron Thorn by Caitlin Kittredge 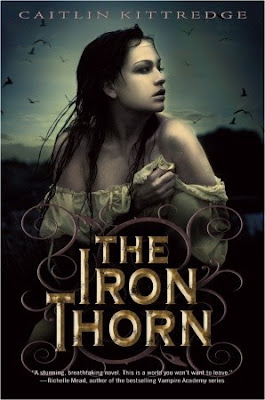 In the city of Lovecraft, the Proctors rule and a great Engine turns below the streets, grinding any resistance to their order to dust. The necrovirus is blamed for Lovecraft's epidemic of madness, for the strange and eldritch creatures that roam the streets after dark, and for everything that the city leaders deem Heretical—born of the belief in magic and witchcraft. And for Aoife Grayson, her time is growing shorter by the day.
Aoife Grayson's family is unique, in the worst way—every one of them, including her mother and her elder brother Conrad, has gone mad on their 16th birthday. And now, a ward of the state, and one of the only female students at the School of Engines, she is trying to pretend that her fate can be different.


I had the chance to read The Iron Thorn whilst on holiday in Marrakesh.  I'm not bragging about this, but want to explain how great writing can take you from your physical location and transport you to another place and time entirely, and make you forget that you are in one of the most exotic places on earth.  The Iron Thorn did that, with ease.


One of the things (there are many) that CaitKitt excels at is world-building.  Rich and glorious, we are thrust page first into a hustling bustling Steampunk world where gears grind, mysterious machines run on steam and the hints of the something more, the something other is so well handled, I fell for it: hook, line and sinker.  Set in an alternate 1950's Massachusetts, the city we find ourselves in is called Lovecraft.  It's been a few weeks now since I've read The Iron Thorn but I can still remember snatches of the writing, the feeling it evoked of a world both foreign yet familiar.  It kept me off-kilter just enough to be able to easily identify with the characters as they move through the city, make their escape and leg it to Aoife's dad's home called Graystone.  All of this is to try and rescue Aoife's brother Conrad who had sent her a coded message, asking for her help.


Through Aoife and her friend, Kal and their guide, Dean, we are shown a world that on the surface is upheld strongly, seemingly by sheer force of will by one man and his Proctors: Grey Draven. (I squealed with delight when I read the name because, you know The Crow reference made me ecstatic).  The world is divided by people who believe in all things mechanical and "normal" and logical...and then there are those who see the world as not quite a logical place.  These people are seen as enemies of the city of Lovecraft and they are actively sought out, interrogated and publicly executed.


I desperately needed to know what Aoife's story was - what was this thing that is looming ahead of her when she turns sixteen? Will she really go insane? Is her mum completely mental and who are the Proctors really? And is her brother insane and where is he? And why did her dad disappear and never keep in touch with her?


There are a lot of questions and the majority of them are answered by the end of The Iron Thorn but because of the way the book ends, we know we are in for a bumpy ride in the other two books that are due for release.

When Aoife and the two boys turn up at Graystone we are very much worried for their well being.  Especially when we realise that actually, this deadly virus Aoife may/may not have, seems to be genuinely real and an actual threat.  As things are pieced together (best invention: Graystone, the clockwork house!) by Aoife and Dean, the bigger scale of their quest is revealed and what Aoife's task is.

I'll admit it: this book is not for the lazy or faint-hearted.  CaitKitt expects you to keep up.  There is action, there is exposition, there is awful sexism that Aoife fights against (you go girl) to a certain extent and we know things are going to come to an ugly head sooner rather than later, there is a multi-layered BIG story at the core of this.  And of course, like Buffy, Aoife has the power to either destroy or save the world.

I spoke to Mark about this extensively when I finished reading The Iron Thorn - the ending reminded me of the movie / graphic novel Watchmen where the world is brought to the brink of disaster and something awful happens, but for the good of the world.  In the end.  And I'm wondering if this is what The Iron Thorn was about? I don't know, but I want to know more.

Full of great literary references, The Iron Thorn is a book for confident readers - be they YA or adult.  As I said, she expects you to keep up as she delves deep into the multiple layers of truth, history, myth and lies.  The alternative-world-mythos she created is complex, easily tying in with our own, but giving it enough of an eerie slant to make it feel creepy and shivery.  There are scenes of pure magic and scenes of genuine unpleasantness.  I don't know if The Iron Land will appeal to everyone - even hardened steampunk fans, which I am not, by the way - but it ticked the boxes for me: I felt like I was there and  I was at turns both in love with Aoife, frustrated and annoyed by her, and wanted to shake her and slap her for being a damn fool.  Kal, well, Kal drove me nuts and not in a good way and Dean was lovely and a bit swoony, and the perfect foil to Aoife.  The characters felt very real and I'm looking forward to finding out more about the nasty piece of work that is Grey Draven, and I liked the world, the alternate history and hope more of that is elaborated on in the upcoming sequels.

Definitely give this a whirl if you're in the mood for a dark, steampunk fairy tale full of atmosphere, drama and action.  I read it in temperatures of around 37C and yet it made me shiver.  This is a good thing!

Find Caitlin's website here and find her on twitter as: @caitkitt
Who wrote this? Liz at 7:00 am

I've had this for ages and still haven't read it. I will literally have to go and dig it out of my room!

I now want to read this! Liz, do you have to add to my TBR pile?

I was surprised by how much I enjoyed this book-there was so much awesome world-building and I loved Aoife's bravery and determination. I didn't end up loving the second book quite as much but I'm still looking forward to the conclusion.