The Seeing by Diana Hendry 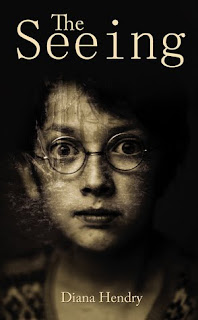 Synopsis
"What gave me a sudden shiver was the notion that there were two of me. The little sister me, who was good and mostly kind; the girl Alice and Dottie knew. And then there was this other me, the one lurking inside me, eager for danger and risk, for something that could be as wild as the sea in winter. For Natalie."

Nothing ever seems to happen in the quiet, respectable seaside town of Norton. The war is over, and everyone's thrilled to be living peacefully - everyone but thirteen-year-old Lizzie, who's so bored she feels like she could scream. Until wild, dangerous, break-all-the-rules Natalie arrives. Lizzie is drawn irresistibly to the exciting new girl from the wrong side of the tracks, and as the girls grow closer over the summer, Lizzie discovers a new side to the town - and to herself - that she had never imagined before.

Natalie and her young brother, Philip, let Lizzie in on a secret. Despite what everyone thinks, the danger of war is still hanging over them. Philip has a 'second sight', and all around him he sees evil: apparently innocent people, hiding in this quiet town until the time is right for revenge. Natalie and Philip call them 'Left-Over Nazis'. It's up to them to root these people out and force them out of Norton. Lizzie is swept up in what begins as an exciting game, but as the children begin to target their neighbours, the consequences of Philip's 'gift' spiral quickly out of control.

A chilling, powerful tale that will linger with you long after the final page, from Whitbread Award-winner Diana Hendry.
I first heard about The Seeing at the Random House Book Blogger's Brunch and thought it sounded like an eerie tale. Ironically my mum would have been a year younger than Lizzie was in 1956 and know from the stories she's told that the fifties were no picnic. Rationing only ended in 1954 and the war was still raw in people's memories. However, it's only a year until Harold Macmillan says we've, "Never had it so good," so truly an odd time. Lizzie and Natalie can't remember the war but the signs of it are all around them. It's also a difficult time for both of our main characters but for different reasons. Lizzie's sister Lal is about to get married and is an adult now leaving Lizzie feeling left out and just a kid. Natalie is new to the area but her dad was a casualty of the war and she's obviously being neglected by her mother. The two form an unlikely friendship and from this point the story spirals into one initially of unease and then later downright danger.
The prologue tells us that something terrible is going to happen but the author weaves such a spell that I spent most of the book in a state of dread. Thirteen is a difficult time and Lizzie is keen to get away from her safe existence; she abandons old friends and is overjoyed when Natalie shows an interest in her. Where Lizzie has a comfortable and well-off life, Natalie is obviously poor and where Lizzie is quiet and obedient Natalie is wild. But Natalie does take notice of Lizzie and with eight-year-old Philip they begin the, "game," of rooting out LON's or Left-Over Nazi's. This involves Philip having a vision and Natalie interpreting it to identify the person hiding in the community pretending to be normal. Once they find their target they expose them by sending them letters or bullying them as they go about their business. This obviously has a life-altering effect on the individual but Natalie sees it as her duty and Lizzie is happy to go along with her.
From this point onwards the book is nothing but dark and disturbing. It becomes clear that Natalie's motivation is her awful home life and the loss of her father. Philip is haunted by the, "bastard uncles," who visit his mother but also seems to have some real psychic talent which adds an element of mystery to the story. For Lizzie's part she's struggling with the girl that everyone sees from the outside and the part of her inside that feels different, who wants more than the quiet safe life that she endures. But as the story progresses and Lizzie and Philip start to think for themselves, Natalie becomes more unpredictable.
The Seeing is a slim book of less than two hundred pages but that doesn't detract from a truly powerful tale. I loved that the story was part first person point of view from Lizzie, part diary-entry from Natalie with added letters from a painter on the beach to his sister. The painter - Hugo - gives an interesting adult view to the events making the story all the more macabre.
Who wrote this? Essjay at 7:30 am