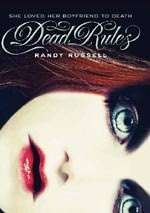 Synopsis
When high school junior Jana Webster dies suddenly, she finds herself in Dead School, where she faces choices that will determine when she, a Riser, will move on, but she strives to become a Slider instead, for the chance to be with the love of her life--even if it means killing him.
I heard about this book on Twitter and the lovely Emma from Book Angel Booktopia sent me her copy (thank you!). I've only just managed to get round to reading it but wow, if ever a book was right up my street it's this one. It follows the story of Jana Webster, of Webster and Haynes. The Haynes here is Michael Haynes, Jana's serious boyfriend and together they're the perfect couple. The book opens to find Jana on a bus. She's not sure what she's doing there or why she's wearing a uniform she doesn't recognise. All around her are weird looking kids who appear to be wounded or damaged in some way. In her first class she meets Beatrice who has a yard dart sticking out of her head. Yep, Jana fell, died and when she "woke up" she found herself in Dead School.
Jana clearly has a lot to deal with what with being dead and knowing that Michael is still alive instead of by her side. She soon learns that she's a "Riser," one of the good kids as apposed to a "Slider" who died doing something bad. The Sliders are closer to earth but as a result can have more of a presence in the physical world. If Jana wants to put things back to how she feels they should be she needs to rejoin Michael by killing him. At the beginning of the book I didn't really have much sympathy for Jana's quest. I definitely felt bad about her predicament - Dead School has all sorts of rules that make her existence monotonous and constricting. But as the book develops we find out more about her history, her model mother and her self-imposed solitude which made me feel for her.
Meanwhile, in the land of the living Michael and his friends are carrying on. Without giving away too much of the plot I really didn't foresee the way everything unfolded. It's beautifully done too - there's an offhand comment here, a curious action by a character there. Gradually, Jana is forced to confront the truth. I may not have liked Jana all the way through this book but I had to admire her single-minded determination. She's used to being alone so doesn't worry about conforming the way the other Risers do. As a result she's an interesting main character. I need to add a word about Mars Dreamcote, Dead School attendee and Slider. He feels a connection to Jana and although she is committed to Michael there's definitely something between them. He takes Jana under his wing and encourages her to see outside of the confines of Dead School consider the possibilities of her new existence. His story is as engaging as Jana's and I'm really wishing for a sequel to this but I've searched everywhere and found no news of one yet.
I found Dead Rules very addictive. I wasn't sure if it was because of the way that pupils' death stories are gradually revealed or whether it was Jana's dawning realisation that her life wasn't quite as she imagined. Ghoulish yet amazing, a real revelation and I loved every page.
Who wrote this? Essjay at 7:30 am