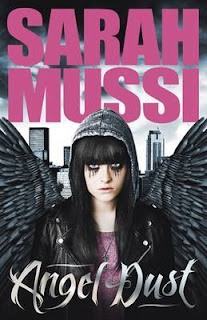 Synopsis
Would you move heaven and earth for the one you love? ANGEL DUST is a powerful, gritty and utterly modern tragic love story with a twist. When Serafina, the brightest and most beloved of all God's angels, is sent to collect Marcus Montague - the original badman - and take him to Hell, she finds herself powerfully drawn to him and makes a decision that places her in the middle of a war between Heaven and Hell. Can Serafina fall in love without falling from grace? Can Marcus's soul be saved? And just who is the mysterious and ever-so-helpful stranger Harry?
I've read a great deal of paranormal romance but I don't think I've ever read one where the angel is both the main character and the narrator. I've got behind in my reading as there's been a couple of books recently that I didn't want to finish. Once I'm in a reading slump it takes a special book to give me a jolt and I hoped that Angel Dust would be the one. I knew I was reading something very different from the first chapter. Serafina is new on soul collection duty and the only other ones she's done were asleep at the time. So when Marcus is on The Manifest for collection that night she wasn't expecting to fall in love. All the others were so easy but she's keen to get it right, not to mess up. Despite her best efforts she finds herself unable to do her duty; it's something about the way he talks, the way he smiles. She's offered a way out by an odd man called Harry, a way to buy more time for Marcus and she grabs the chance without asking any questions.
I hardly ever read prologues. I sort of skim read them then read them afterwards but for some reason this one grabbed me. True, it didn't make a whole lot of sense but it's a sign of a great book when I go back and read it again as soon as I'd finished the last page. I loved Serafina's voice. She revels in all things human and has an appealing mix of naiveté and knowledge. She's seen all sorts of souls in her time as an angel and doesn't really understand why humans make the choices they do. Angel Dust is full of religious world building - some references I recognised but others I wasn't overly familiar with but it didn't hinder my enjoyment. I was intrigued by Serafina's heavenly world though and how eager she was to leave it to be by Marcus's side.
Marcus is in a gang but Angel Dust doesn't glamorise this in any way. It's desperately clear how much hurt and suffering he causes his family and those who love him. Marcus isn't depicted as a victim either who's trapped against his will. The theme of free will runs through the book and Serafina (and the reader) has to separate her feelings for Marcus the individual and the man who has the potential to do terrible things. Marcus makes mistakes and bad decisions but he's not alone in this. Confused by how to save his soul Serafina struggles to be both the perfect angel and Marcus's saviour. As she falls deeper in love she starts to question everything she's been told.
I loved this book so much. There's some witty references to paper work, contracts and the workings of heaven that keeps it fresh. Serafina may be an angel but as a character who's struggling to find her way her journey is easy to identify with. More than anything I fell in love with Serafina, Marcus and their struggle. They go through so much that I was crying by the time I finished their story. There's some perfect symmetry in the writing too: repeated sentences and music leads to one very powerful ending scene. This book's a keeper, I'll definitely read it again and it goes on my list of the best of 2012.
Who wrote this? Essjay at 7:31 am