Strontium Dog - The life and death of Johnny Alpha: The Project 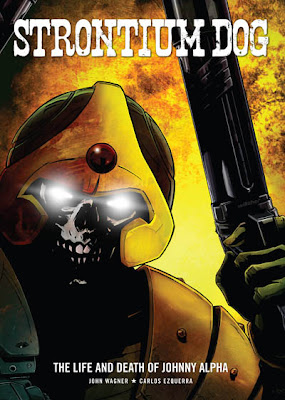 Earth, the late 22nd century. Many survivors of the devastating Atomic Wars were mutated by Strontium 90 fallout. These ‘mutants’ became a victimised underclass- hated by the ruling ‘norms’ and forced into squalid ghettos, the only job left for them was bounty-hunting.
The best of the Search/ Destroy agents (also known as Strontium Dogs) was a man called Johnny Alpha. He became famous for fighting for mutant right and died defending his kind from ultimate destruction.

But it seems even death can’t keep a good dog down and rumours are circulating about Alpha’s return..

When I first got wind of the potential return of Johnny Alpha, I was bitterly disappointed. Don’t get me wrong – I loved Strontium Dog, and Johnny Alpha was the template for every other RPG or PC game I played across my teenage years (and beyond tbh). I sobbed like a madman when he was killed. But it was a Good Death. He died for his convictions, and went down fighting, scant consolation for the mutant shaped hole in my life that his death left behind. I took some solace in the knowledge that the impact of his death was such that Carlos Ezquerra didn’t want to illustrate that issue. It made my grief feel a bit more legitimate.

So. On one hand it would be good to have Johnny back, but that was far outweighed by the worry that his ‘resurrection’ would be a tawdry and cynical gambit that would cheapen his death and dilute the impact of such a powerful story. Then I heard that the story was being helmed by John Wagner and Carlos Ezquerra once again, the same pairing that created Strontium Dog all those moons ago, and some of my dread passed, although it still took some time before I found myself sitting down and turning to page 1 of The Project.

Ezquerra’s familiar and distinctive art immediately leaps out and welcomes you, a continuity of style that’s immediately reassuring. The story starts with and follows Precious, a writer compiling a true account of the events surrounding Johnny’s death. She teams up with a barely sober Middenface McNulty to start seeking out accounts from the surviving witnesses of his death regarding the rumour that contrary to the official account, Johnny’s body was brought back through the dimensional portal that he had given his life to open.

It’s a clever device that allows Wagner to feed through enough backstory that anyone unfamiliar with the original story won’t feel utterly lost. It also lets the story gather pace without feeling rushed, so that by the time that they’re closing in on Johnny’s resting place it's gathered enough gravitas that it doesn’t feel rushed, distancing it from the way that deaths in the Marvel/ DC universes have lost their impact.

I have to say that I came away from this feeling optimistic about the resurgence of Strontium Dog. It’s handled very well, the story is as strong as anything that has gone before, laden with twists and revelations and, damn it, Johnny’s back!

A fine job by Messrs Wagner and Ezquerra, and well worth the wait.

Find the full story here.
Who wrote this? Mark at 8:00 am