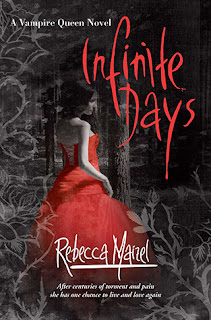 Synopsis
For 500 years Lenah Beaudonte has been a vampire. 500 years of seduction, blood and destruction. But she is sickened by her dark powers and longs to feel the sun on her skin, grass under her bare feet, and share the breath of a human kiss.

She wants to be mortal again.

But is she really capable of being human, after her long years of darkness? Waking up as a sixteen-year-old girl brings Lenah many things the life she has missed, taste, touch, love. But a vampire soul is not easily shed. And her coven of four vampires she led in decadence and thrilling destruction want their queen back…
I don't know how this book passed me by but with the second Vampire Queen novel having recently come out I wanted to catch up. The book begins with Lenah waking up after a hundred year sleep - one which ends with her being transformed into a mortal sixteen-year-old girl. Her maker, Rhode, is responsible for her return to human form. As a result he dies the next day leaving Lenah completely alone in her new life. I quite liked this twist as it meant she had to rely on herself during the first part of her story. She must assimilate herself into high school life and make sure that she doesn't attract the attention of her former coven. When Lenah was a vampire she was completely deadly, ruthless and cruel and thought nothing of killing a child to feed upon. Infinite Days definitely embraces the traditional vampire - deadly killers who have no trace of humanity about them. I found this quite a relief. I always prefer my vampires to be inhuman monsters.
Something that I loved about Infinite Days was the switch between present day and Lenah in the past. As she was made a vampire in the 1500's we see her as she was then and throughout her life (death?). We follow her over the centuries and see how the passage of time has changed her. Fortunately this means that we get to see Rhode and also some of her other coven members, especially Vicken - the only other love of Lenah's undead existence. Through these flashbacks we get to understand her love for both vampires and get a feel for why she's so desperate to be human again. Because she has existed for over five hundred years her language is antiquated at first and she struggles with things we take for granted like clubs, boats and other run-of-the-mill things. This mix of young and old make Lenah a very unique heroine.
In her new life I loved seeing how Lenah adapts to being human again. She initially keeps some vampire traits like ESP or vampire sight. She struggles to understand how to interact socially and is saved by Tony, a student at her high school on an arts scholarship. They bond and although it's easy to see where Tony's feelings are going Lenah is distracted by the gorgeous Justin. I wasn't initially convinced by Justin but let's just say that he won me over in the end! Lenah's journey is an incredible one; she goes from being socially inept to a fully fledged teenager. But of course Lenah's past catches up with her and the finale is breathtaking. I'm just glad that I have the next installment as the cliffhanger would have driven me crazy otherwise.
Who wrote this? Essjay at 7:30 am

Ive had this one for a while and whilst I want to read it I have been putting it off… however I think I need to after reading this glowing review! Thanks!