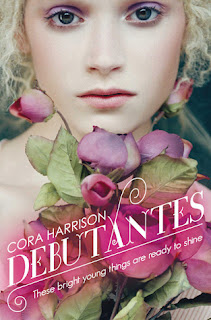 Synopsis
It’s 1923 and London is a whirl of jazz, dancing and parties. Violet, Daisy, Poppy and Rose Derrington are desperate to be part of it, but stuck in an enormous crumbling house in the country, with no money and no fashionable dresses, the excitement seems a lifetime away.

Luckily the girls each have a plan for escaping their humdrum country life: Rose wants to be a novelist, Poppy a jazz musician and Daisy a famous film director. Violet, however, has only one ambition: to become the perfect Debutante, so that she can go to London and catch the eye of Prince George, the most eligible bachelor in the country.

But a house as big and old as Beech Grove Manor hides many secrets, and Daisy is about to uncover one so huge it could ruin all their plans—ruin everything—forever.
First off, this cover must surely be in the finalists for prettiest of the year? That's what drew me in to be honest but I've always been a bit like that. I do love a bit of period drama too so this combination meant I had to give Debutantes a try. The four sisters - twins Poppy and Daisy, eldest Violet and little Rose - are all members of a faded and much-reduced aristocratic family. Since their father lost all of their money in some odd scheme things have been very tight. So tight in fact that there's little chance that Violet will be able to have her debutante season in London or be presented at court. This means she has no hopes of finding a rich husband and getting herself and her sisters out of their grinding poverty.
We get to know twin Daisy pretty well as the book mostly focuses on her. She is an amateur film maker and has high hopes of doing it professionally. As it is, her amateur films bring in some much needed cash. It's obvious though that Violet must go to London so between them they hatch a scheme to help bring this about. From the beginning there is also a mystery to be solved which starts in the form of a letter found in an abandoned stable. To be honest the answer to this mystery is fairly obvious from very early on but this didn't really spoil my enjoyment of the book.
The interest in this book, for me, was the 1920's detail. The fact that the girls didn't go to school as there was no money. The way that all money went to first born sons meaning that the debutant season is really a fierce battle between eligible girls trying to snag those first-born sons. Although I don't think that Violet was a character who was easy to like I did feel sorry for her. The only other opportunity that appears to be available for her is to settle as a spinster if she can't marry. The girls are even set to lose their home when their father dies due to an entail on the estate (Sense and Sensibility style).
Things really take off when they go to London and everything is neatly sewn up by the end of the story. Debutantes is a fun, easy and escapist read - perfect for holidays.
Who wrote this? Essjay at 7:30 am