Fear to Tread by James Swallow 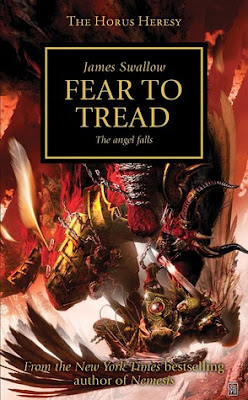 Since the earliest days of the Great Crusade, Sanguinius – angelic primarch of the IXth Legion- was ever among the closest and most loyal of Horus’s brothers. But the Blood Angels have long kept their true nature hidden from the rest of the Imperium, and when the Warmaster hints that the key to their salvation may finally be within their grasp, the sons of Sanguinius race to claim it.
Now, as the revelation of their betrayal dawns and the traitors’ hand is revealed, the Blood Angels must face all the warp-spawned armies of Chaos, as well as their own personal daemons upon the blasted plains of Signus Prime.
The first thing that grabbed me about Fear to Tread was how nice and chunky it was. Clocking in at a respectable 508 pages, it’s a lot of bang for your buck and also means that most people won’t blaze through it in a single sitting. Note the use of ‘most’.
FTT opens with a pre-heresy battle, the culmination of a hard fought campaign prosecuted by Horus and his Luna Wolves in conjunction with Sanguinius and his Blood Angels, and lays the foundations for one of the cornerstones of the horrors that await the Angels on Signus Prime. From there, the action moves ahead to the uneasy period following the Council of Nikeae, the calm before the storm that encompasses the scourging of Prospero and the moment when the traitor legions reveal their new allegiance on the ashes of Isstvan. It’s the time when Horus is making the most of the last days of the Crusade, using the unsuspecting trust of the loyalist legions to isolate or manoeuvre them into vulnerable positions for a swift, decisive attack, and in FTT it’s the Blood Angels who are in his sights.
Horus ‘ manipulations crystallise slowly at first, and seen from the perspective of a small number of Blood Angels, you can understand just how it is that he can pull off such a monumental gambit. Sworn to the Emperor’s vision of universal apostasy, holding to science and logic over the foolish and destructive superstitions and mysticism that have held mankind back, the Angels wouldn’t know a demonic trap even if they were standing in one. Or in this case, obediently flying into one. And once it’s unleashed, how do they fight something when every fibre of their being and all they have been taught tells them that it doesn’t exist? The answer to that question is earned in blood as Horus’ daemonic catspaws enact his plan into action, filling the plains around their macabre cathedral with rage and blood as the primarch battles his greatest foe.
With a fistful of Blood Angels novels under his belt, and an audiobook, there was never any doubt that James Swallow would be the one tasked with bringing the story of the Blood Angels and the legend of the Red Angel to life. That level of familiarity with their history, the fate of Sanguinius and the nature of their legacy comes through in his writing; there’s no feeling of having to digest lumps of exposition and overall it simply feels effortless. Even if you’ve never picked up a Blood Angels story before, FTT will draw you in and keep you turning those pages. I think he’s definitely nailed it. It’s ripe with the feeling of that era, and the knowledge of what lies ahead for Sanguinius and flawed sons gives it a subtle but unmistakeable air of tragedy. Just what I like for 40K!
Buy it, read it, beg for more.

Read an extract here of Fear to Tread and watch the trailer below: