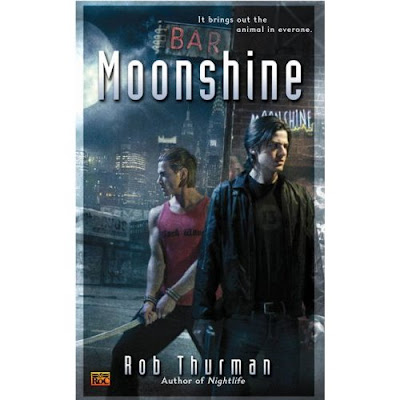 The very talented Ms. Thurman is back with her second instalment of the brothers Caliban and Niko. And boy, do they get worked over in this one. All the characters introduced in Nightlife reappear, they get fleshed out, we learn a bit more about everyone, but the main character is still Caliban and he shines in his brilliant sulkiness and dark gloomy gothicness. Yes, that's a word. Because I say so.
The excerpt from the author's site:
After saving the world from his fiendish father's side of the family, Cal Leandros and his stalwart half-brother Niko have settled down with a new apartment and a new gig-bodyguard and detective work. And in New York City, where preternatural beings stalk the streets just like normal folk, business is good.
Their latest case has them going undercover for the Kin-the werewolf Mafia. A low-level Kin boss thinks a rival is setting him up for a fall, and wants proof. The place to start is the back room of Moonshine-a gambling club for non-humans. Cal thinks it's a simple in-and-out job. But Cal is very, very wrong.
Cal and Niko are being set up themselves-and the people behind it have a bite much worse than their bark...
Genuinely a book I would reccommend - completely. I hear the third installment is due next year only. A very very long wait. But it will be worth it.
Who wrote this? Liz at 12:51 pm