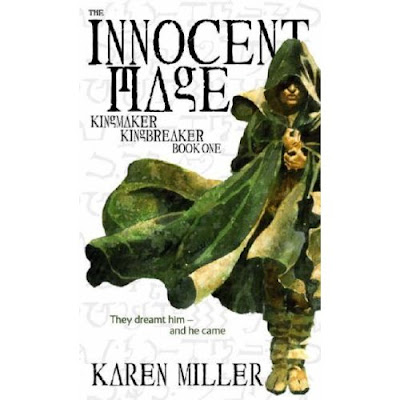 Firstly, this is real fantasy. Secondly, the author, Karen Miller is absolutely brilliant at what she does. Thirdly, contrary to a lot of other fantasy stories, this is very much a character driven novel. You intimately get to know Asher, the main character, what makes him tick, his hang ups (which are hilarious, sometimes) and his rise to becoming Gar, the Prince's man. Then we get to learn more about Gar, the royal family, their tribulations, hopes and dreams. It has the idea of epicness behind it, but because the writing is so tight, you don't really get to drift in a sea of political nonsense and a huge cast. You get to know this bunch of characters, their motivations quite well and you sit back and think to yourself....how the blazes is she going to sort it all out in the second book...because there will only be a second book, not a third. Which is also a refreshing change.
I must say, I didn't actually pick it up to buy and read, hubby did. I was astounded. He rarely does that, preferring to read whatever I pick up. So he felt pressured, I think, in enjoying Innocent Mage. And he did, but he kept it quiet, only chuckling to himself now and again, then handed it to me with strict instructions to read. And I did, during my spell at home whilst struggling with godawful flu. And it swept me away. I really felt like I got to know the world, the characters, and what made them tick. One amazing thing though - she has the knack of showing, not telling - there was maybe a bit of telling, but the showing was clear and concise and you caught up on a lot of the finer aspects of the world the characters lived in.
Very vivid and a rollickingly good yarn. A warning though: if you do not like cliff-hangers. Don't buy it. Or rather, buy it, but don't read until the final book comes out, because it will make you want to pluck at your hair and scream at her. Devious author. But a very good one.
Who wrote this? Liz at 3:16 pm