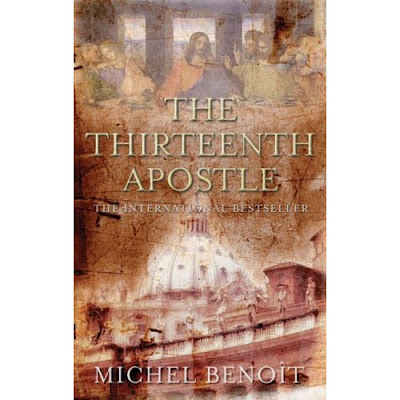 I recently bought a copy of this book, purely on the name and the cover. I skimmed the back and definitely didn't read the author's bio at the back of the page. I am a sucker for books like this and am a huge Umberto Eco fan, so when I saw it was recommended as being in the similar vein as The Name of the Rose, I was sold.

I only today started reading it. I have great hopes for it. You can tell, from the word "go" that it is on a vastly different level than Dan Brown's work, Sam Bourne or Mr. Sussman's. This is written by a scholar, for people who enjoy reading, words, thought and mystery.

This from the publisher's website, an interview with Mr. Benoit:

Michel Benoît on The Thirteenth Apostle

In 1975, having returned safe and sound from Rome, where I had spent four and a half years in a pontifical university close to the Vatican, I began to study the sources of Christianity, only to uncover a scoop: Jesus was a Jew! I had never heard this before.

He was transformed into a God shortly after his death: where? when? how? by whom? and above all, for what reasons?

That is when I discovered the origins of a 2,000-year-old deception, the creation of an immense edifice of power (the Church) in the name of a man who had become God despite himself.
And I discovered that I was not the only one: for fifty years scholar upon scholar – Jewish, Protestant, Catholic – had been working towards the same goal – the rediscovery of the historical Jesus. They were highlevel academics, operating in complex disciplines: history, exegesis, archeology, linguistics, epigraphy…

Along the way I discovered in relation to Jesus a thirteenth apostle, who appears sporadically in religious texts. This man really existed, he presents himself in the Gospel according to St John as a close friend of Jesus.

He plays a crucial role in the final weeks of the life of the man from Galilea. However his existence and even his name have been erased from all the texts and from western memory.
Why? Did he know something that must be hidden at all costs? Was he that dangerous?

I have been on his trail, as a scholar interested in historical truth. He seems to have been linked to the Essenians, and his legacy has begotten a movement which has persisted throughout the centuries up to our times: gnosticism.

This had all the elements of a thriller. As opposed to Dan Brown, mine is solidly based on historical research. I have drawn on this material to imagine what would have gone happened if this man had left behind an epistle in which he revealed the truth about Jesus.

This letter does not exist, but could have existed. Fiction completes history, as long as it respects probability: sè non è vero, è ben trovato – if it is not true, it is well imagined.

The only thing that was left to do was to let the bombshell detonate. It places the Vatican in a perilous position, as its power derives from the foundation myths of Christianity. It is also worrying for the established Jewish and Muslim faiths, for whom Jesus is a troublesome figure. As for my description of the behaviour inside the Vatican (plots, lies, manipulations, sex and money), it is actually an understatement of the reality that I have encountered.

For Roman Catholics, this book is dangerous because it tells what must be silenced. For Muslims it is unacceptable because it describes (briefly) the true birth of the Koran.

For those who are seeking clarity after centuries of lies, it is enlightening. For those who enjoy juicy stories, it is refreshing.The author does not yet wear a bulletproof vest, but he is seriously considering renting one.

I have come to notice a new refrain in books like this now - gone is the whole Jesus was married to Magdalene and they had a child and it that is what the grail is all about. The more - how can I put this? - levelheaded thinking is: Jesus was just a man. A talented man, like many other miracle workers of his day. He had a following, he had disciples, but so did Simon the Magus. One of two things happened: someone decided to give the Jewish people their Messiah. They turned this man Jesus into their saviour, they bound people together in faith, so that they could be controlled. Which, if you think about it, is the way religion has always acted - as a control to its subjects - don't read that, it is evil, don't think that, it is blasphemy. It is what countless wars have been fought over. It is alarming to think about. A new line of thought - that he was just a man who had gained enough popularity among the already troublesome populace that someone like the Roman emperor / one of the "messiah's" followers thought that this was a good way to bind people together - give them their martyr, give them a miracle so astounding, that they would follow and fall into line.

So. As a hobbyist theologian and a studier of all things interesting and mindblowing, I am really looking forward to see how the book develops. It sounds amazing and I will probably sit up all night reading it. Because I am a nerd and I like a mystery.

I am happy to give this eight out ten stars so far. It opens as scenic as you could wish a luscious epic could.
Who wrote this? Liz at 11:21 pm