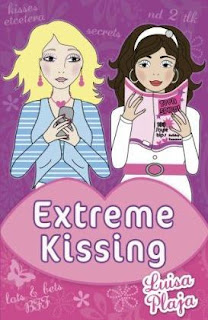 Carlota and Bethany are best friends. Bethany is the sensible one with a long-term boyfriend, Carlota is the crazy one with a wild past and rebellious nature. All is fine in their world - apart from Carlota hating her stepdad and longing for a old flame. And apart from Bethany thinking her boyfriend is about to dump her and that her period is late...

Carlota comes up with a plan to put all their troubles behind them and go on a girls-only wild day out, with only their favourite magazine to guide them through the day. If they open it on a fashion page they have to get hold of a fabulous new outfit and pretend to be models. If they open it to a page on snogging, they have to find a boy to snog. The magazine will take them everywhere they need to go - but will it help them to reveal the secrets they are keeping from each other?

There is a fantastic concept encouraged by the fictional Spice! teen magazine in Luisa Plaja's second novel for teens: Extreme Travelling. Take a favourite magazine (in this instance, it will be Spice, as read as gospel by Carlotta and Bethany)open it anywhere and figure out the challenge the page has set you. And then go ahead and do it.

The two girls travel all over London following these randomly set of quests. They get into trouble, they meet some dodgy people, they take part in an X-Factor type show, the drive around in a Limo and pretend to be tour guides on one of London's Tourist Guide busses - it is sniggerlingly funny.

Initially I had my doubts - I did, I won't lie. The cover was just too cutesy for me at first, but now I love it and have grown very fond of it. My other doubts extended to me liking these two very girly girls and relating to them. These doubts were unfounded. It turns out that these two kids come across as being so sweet and real that I felt a bit sad closing the book on them last night.

Carlotta's character is that of the exuberant wild child who gets into trouble, she keeps being grounded by her step-father (the Diplomat) for doing daft things, purely because she does not think things through. She is more than a bit selfish but not in a necessarily mean way - she sees herself as that one step ahead of the pack, someone who always gets what she wants because she deserves it.

Bethany's character on the other hand is the one that goes through the most radical change in the novel. She is funny, intelligent, a bit shy and hesistant, the responsible one, the one parents love and she has the ability to charm the Diplomat into letting Carlotta out of the house, even when she's grounded. She initially gives the impression of being a bit weakwilled, following along in Carlotta's shadow, doing what she is told. She's also the one who has the biggest problem - she may be pregnant. Her boyfriend's not been sending her any text messages and she's going a little stircrazy - there is pressure from her dad to study for her GCSE's and to crown it all, proof positive that she's pregnant: she's had a "tummy bug" for a few days...

The pace of the novel is brisk - something to get used to. The novel is told from the two difference characters point of view in alternating chapters. It serves to make story move forward rapidly and it is interesting to experience some events from the two different character's points of view. There is very little overlap, but as you read each chapter, you begin to realise what makes these two girls tick.

They are firm friends - not at all blind to each other's faults and failings, but friends nonetheless. Their adventures through London are very amusing and there are some sterling scenes - for instance, when they have a silent disco at the London Eye and then they manage to get loads of tourists shimmying around with them. Excellent and giggling stuff.

There is much more to this book than meets the eye. Much more. Charlotte's behaviour is easy to analyse once you realise how much she dislikes her mother. She appears very vacant, at first but then you realise she is forcing herself to behave the way she does, doing all these crazy things, like getting herself a massive reputation when doing Kissing Etcetera with boys at school. It is to get her parents to notice HER not what she's doing. Bethany knows she has a future as she is intelligent and studious all the while desperate not to think about being pregnant - the thing is, she's too scared to do the test. Doing the test would confirm it for real. Making it genuine and true and not something that can change.
Both characters go through an amazing internal journey in one day and it will have far-reaching consequences for them both. It is all skillfully handled by an adept writer with a keen eye for cutting to the quick of the matter.

The novel ended with a tremendous conclusion. I thoroughly enjoyed it. Mark was dubious, like me, but I sat sniffling into a tissue last night after finishing it he just nodded and said: "Yep, that was a good book" and handed me another tissue.

Find Luisa Plaja's website here. The novel is now available in all good bookshops and online.
Who wrote this? Liz at 12:37 pm

I'm glad you liked it. I agree, some of the scenes were just so inventive! I love the silent rave.