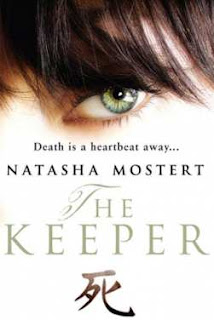 Mia Lockhart has a secret.

Her mother was a keeper, as was her grandmother – women who were warriors, healers and protectors.

And when a mysterious man enters her life, she puts this to the test. Adrian Ashton is a brilliant scientist – and a killer. With the aid of an ancient Chinese text, he has mastered the art of capturing the chi of his opponents -the vital energy that flows through their bodies.

Mia finds herself drawn to his dark genius. But when he targets the man with whom she is falling in love, she is forced to choose between them.

Natasha Mostert is the acclaimed award winning author of the beautiful, surreal and darkly gothic Season of the Witch. In this, The Keeper, her second novel published by Transworld / Random House here in the UK, she shakes off her gothic cloak and firmly enters a different world, one which you can tell she has a great affinity for - that of the world of martial arts.

Natasha is a practicioner herself and her love for the sports, the forms, the fighters and what they go through shows vividly in her writing.

In Mia we have a unique heroine - she is a martial artist herself but she is also a tattoo artist with a tremendous skill and responsibility - that of being a Keeper - a Keeper is always a female, someone who cares for a group of fighters, stepping out to care for them in the spiritual world, bringing back that essential life force - chi - to help them heal and care for them. Being a Keeper is having a strictly non-sexual relationship with the fighter under her care - she becomes a mother of a sort, a carer, an odd relationship with a small select group of non-professional fighters.

The Keeper is wonderfully written. If you have read or even heard about Season of the Witch, you will know that Natasha's work brims with a strong strain of supernatural and surreal. Whereas Season was incredibly dark and dangerous, The Keeper is not necessarily a lighter read but it feels less close, less shadowy and perhaps less constricting, although the concepts behind the novel are quite dangerous and nervewrecking.

I honestly am hoping that I am not confusing anyone with the above paragraph - The Keeper is a bit of a pie book - it has slices of so much in it and it is an excellent read. Also, perfectly published in time for the Summer!

A further note: Natasha has decided to donate the income from The Keeper to help fund CPAU Fighting for Peace programme which is an amazing initiative - you can find out all about it on Natasha's website.
Who wrote this? Liz at 7:49 pm

Email ThisBlogThis!Share to TwitterShare to FacebookShare to Pinterest
Labels: natasha mostert, the keeper