Musings on the Glorious Dead 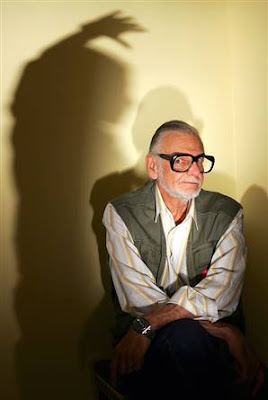 The Grandmaster of Zombie - George Romero

Has there ever been a cooler word than zombie?

I’m not talking about the deeper, historic-cum-religious origins of the word, I’m talking about the sound of it. Go on, say it out loud. Zombie. It’s strangely comforting, yet still thrilling. Like a mouthful of warm chocolate laced with chilli.

The first zombies I ever saw were courtesy of Night of the Living Dead, having managed to hire a copy despite being underage - veritable larceny back then in the dogdays of the '80's. They scared the pants off me….right up until I realised that I actually wanted the zombies to win. It was a turning point for me. Looking back now, I reckon that brief pause where I sat frozen on the couch, popcorn falling out of my mouth, was the moment I began looking at things, including people, from my own perspective rather than the mainstream point of view; you could say zombies made me the person I am today.

My dvd cabinet attests to the fact that I’ll watch any movie that has zombies lurching about the place, whether they’ve been raised through sorcery or ritual, anointed with toxic waste, infected by aliens or evicted from an overfull hell. I have my own Zombie Apocalypse Survival Plan wedged in amongst the various books, comics, sketches and role playing games featuring my rotten lovelies.

The issue I have with zombies these days is that no one thinks they’re scary anymore. They’ve become horror’s goofy cousin, when they should be its evil twin with the chainsaw fetish.

The fear factor, that sense of creeping dread and terror, needs to be injected back into the genre. IMHO, writers and filmmakers haven’t realised that the terror of a zombie apocalypse doesn’t lie with heavily armed survivors, squabbling over a box of candy in the looted mall after the fact.

It’s there when the newly risen dead first begin walking the streets, when you watch as the parameters and certainties of life as you know it crumble. It’s about eating your supper while dead hands smear blood on your windows. The barking dog who suddenly goes quiet. The man sitting behind you on the bus who coughs incessantly, the sound wet and fractured. The scream from the back of the crowd as you wait for the tube.
Perhaps it’s time for me to put pen to paper and start putting together my very own undead opus.