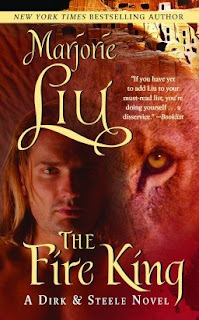 Long ago, shape-shifters were plentiful, soaring through the sky as crows, racing across African veldts as cheetahs, raging furious as dragons atop the Himalayas. Like gods, they reigned supreme. But even gods have laws, and those laws, when broken, destroy.

Zoufalství. Epätoivo. Asa. Three words in three very different languages, and yet Soria understands. Like all members of Dirk & Steele, she has a gift, and hers is communication. When she is chosen to learn the dead language of a shape-shifter resurrected after thousands of years of icy sleep, she discovers a warrior consumed with fury.

Strong as a lion, quick as a serpent—Karr is his name, and in his day he was king. But he is a son of strife, a creature of tragedy. As fire consumed all he loved, so death was to be his atonement. Now, against his will, he has awoken. Zoufalství. Epätoivo. Asa. In English, the word is despair. But Soria knows the words for love.
Short Review:

Buy the book, read it, love it.

I can't remember the last time two characters gripped me quite this much. Karr and Soria's relationship is obviously very much the focus of the novel. You become involved with them individually as well as a couple as they run for their lives from a variety of factions bent on destroying Karr or capturing him for examination and then destroying him. I couldn't shake the feeling like I was being allowed to spy on something very special indeed. (But not in a creepy way!!)

Karr's character is well defined and as the author deals out snippets of information about Karr there is a sense that he is even more than what is being hinted at. Soria's characteri is fully formed - severely hurt just over a year ago, she is still fragile and you understand where she comes from, what her motivations are and as her relationship with Karr develops as they flee, you start liking her more and more. Clever, competent and level-headed in the face of adversity and someone with bucketload of courage, Soria is definitely someone you want on your side in a fight.

This is my first Marjorie M Liu book and although I know little to nothing about the Dirk and Steele Organisation this did not prevent me from falling into The Fire King with unashamed abandon. It is book nine in the series! I should have been struggling to keep up with all the back story, but this is where the book turns into something excellent. As far as I understand it, each book deals with another agent within the Dirk and Steele Organisation which is a covert organisation with members of the magical and shapeshifting kind mingled with humans - some of whom are normal and some of whom have bit of magic.

Having just checked on Ms. Liu's website it transpires that these novels are catergorised as "paranormal romance thrillers" and it is probably one of the most apt descriptions I've read for something like this that almost defies any of the genres I usually read. Marjorie M Liu breaks the mould when it comes to a) style and quality of her writing b) plotting, storyline and story arc c) characterisation and d) world building, throwing in some fantastically mysterious modern day location few of us would have the chance to visit.

I irrevocably loved The Fire King and would recommend it to those who may not be too excited about touching a book about shapeshifters, secret organisations etc. Read The Fire King and change your mind. For those who are already fans of this excellent genre which is revived by Ms. Liu's writing, buy the book! The quality of the writing is what lifts it from its fellows in the same genre along with the author's ability to create two characters whom you actually care about. The romance is perfectly pitched and it never becomes lewd or gross - Karr and Soria would never allow that to happen, not whilst we're watching anyway! But the tension and heat is there and yes, Karr does sound simply scrummy. He gentles Soria beautifully and his reaction to his fierce new friend made me smile quite a few times.

I won't gush anymore as it will become a bit tedious but I'm happy to say that The Fire King has to be one of my top-top adult reads of 2009. I am now keen to read the other books by Ms. Liu. Even if they are out of sequence!

The Fire King is published by Dorchester Publishers over in the States. Find Marjorie M Liu's website here. The Fire King should be available online both in the US and the UK and for those who are interested in purchasing it in the UK, why not run off and support our favourite indy booksellers, Murder One. If they don't have it in stock, they can happily order it for you directly.
Who wrote this? Liz at 9:23 am

I loved your short review! I think I'll have to do just that :D I love shapeshifter books and I'd never heard of this series before so a good combination!

Loving the short review - that should be included in the blurb.