I am so very pleased to welcome my new Twitter friend, R.F. Long to MFB. Today - 7th July 2009 - is the release date of her e-book (by Samhain Publishers) Soul Fire. When she mentioned this today, I leapt at the chance to get her to guest blog and run a competition - because I am greedy and I like pretty things. Sadly, I won't be allowed to enter the competition...*does puppy eyes*

In Ruth's own words:

A new release is always a time for great excitement, but I particularly feel it with the release of Soul Fire. Why? Because the story is grounded in something I love, the folklore of the Sidhe, the Irish fairy folk. These aren't the cute little winged figures the Victorians gave us. The Sidhe are more dangerous by far, often hostile. They don't quite understand humans and though they can love human beings, even that love can be fatal. 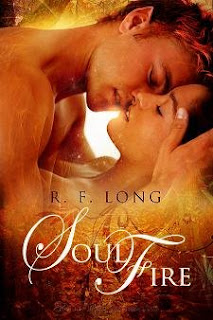 Iron born and iron bred.
Trust not iron, it will see you dead.

Rowan Blake could really use a magic wand to keep her struggling art gallery afloat. But the faerie key she stumbles across is far from a lucky charm. It’s a magnet for danger, and by touching it she’s unwittingly put herself in the middle of a war between the forces of light and dark. And in the arms of its rightful owner, Prince Daire.

While searching for his brother, Daire finds himself trapped in the Iron World with a mere mortal woman who ignites his passion like no other. Each stolen kiss deepens their attraction and sends him spiraling closer and closer to the edge of his inherent dark desires. Desires that act as a homing beacon for the Dark Sidhe, who are intent on forcing him to fight on their side.

The longer he lingers in her arms—and in her bed—the closer his enemies get to her door. And the greater the risk that the gateway to the Faerie Realm will shift, destroying not only his power to protect her, but his very life.

Warning: Contains enchantments, danger, some very scary monsters, a trip to the dark side and hot, soul-transforming sex with an immortal prince.

Writing about Daire and Rowan brought me back to the folktales I heard as a child, that of the Leanán Sidhe (the fairy lover), of fairy mounds and tree lore, of people spirited away because of their talents who only returned years later, changed, or sometimes never returned at all. They are not the heroic figures of legends, nor are they demonic. They are, in a sense, very like us, trying to make sense of their world and of us. Terrible things could befall those who crossed them, or disrespected them, and great rewards could be won by pleasing them. But please them too much and they might just want to keep you.

You can never tell with the Sidhe. You never know which side they stand on or what their reaction might be.

In writing Soul Fire I was very lucky. I wasn't just writing what I know, I was writing what I love. A key thing for writers, I believe, because if you can't feel the emotions and interest you want to create in your characters and your world, how can you convey them in the story? New writers are often told "write what you know" but that's become a maxim that has slid away from its meaning. You can research anything you want to the extent that you know it. But if you don't love the subject you're writing about, don't feel the passion that your characters feel for each other, don't have to force yourself to step away from the research (as I do, frequently), that will show in the words you write.

That way you'll make your wordbuilding consistent. You'll want to get those details right, to include those elements that spark a reader's interest. Of course its a balancing act. The temptation is to put in all those wonderful finds, to overload the book with facts at the expense of the story. Which is why I believe you have to love your story just as much, to want to tell it to the best of your ability. To love it. 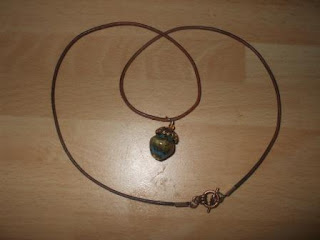 Ruth has kindly agreed to let me give away ONE e-book copy of Soul Fire and ONE accompanying acorn pendant. To be clear: this is one prize and not two, so there will be one winner for both items. The competition is open world-wide. Email me at: myfavouritebooksatblogspot(@)googlemail.com for a chance to win. The competition runs till Tuesday, 14th July 2009.

It wasn't possible to send the email... Is the address ok?