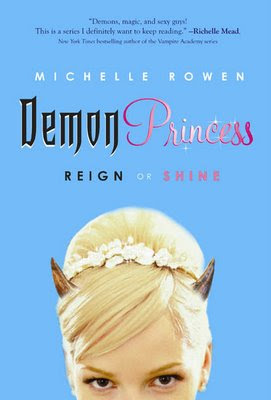 As if trying to fit in at a new school isn't stressful enough, sixteen-year-old Nikki Donovan just found out that her long-lost father is, in fact, the demon king of the Shadowlands—the world that separates and protects us from the Underworld. When she is brought there by the mysterious—and surprisingly cute—messenger Michael, she learns that her father is dying, and he wants her to assume the throne. To complicate matters, a war is brewing between the Shadowlands and the Underworld, her half-demon qualities are manifesting, and her growing feelings for Michael are completely forbidden. Ruling a kingdom, navigating a secret crush, and still making it home by curfew—what's a teenage demon princess to do?

This teen novel his well written, has a great plot and was thoroughly enjoyable to read.

Nikki's mom is on marriage number 4 and has dragged her daughter from sunny California to rather frosty Ontario, Canada. For once she's managed to become friends with the most popular girl in school and when her secret crush, Chris, asks her to the Winter Dance, Nikki's world seems to be absolutely perfect. Well, at least until a cute looking stranger tells her she's a Demon Princess, the heir to the Shadowlands and her father, the man who left her mother before she was even born, is dying. Talk about a shock to the system!

At first Nikki is not prepared to belive, but finally she follows Michael and meets her father. It is a bitersweet encounter, knowing there's not much time. Nikki also meets her aunt, who's looking after her father and who's prepared to take on the burden of becoming Queen of the Shadowlands once Nikki abdicates and returns to her normal life. But Nikki's getting fed up with everybody telling what she "has" to do and decides to maker her own decisions. But they may not turn out quite as she'd anticipated...

Knife-wielding Demon assassins, a Shadow Prince Nikki's supposed to stay away from, new Darkling powers coming online, a boyfriend who may be a total jerk and a best friend who may be a Demon Hunter; let's just say Nikki has her hands full.

I really enjoyed reading "Demon Princess". Michelle Rowen throws a few twists into a familiar story line and Nikki is a believable and engaging character. I found myself cheering her on when yet another adult told her just what she "HAD" to do to make their lives easier.

"Demon Princess" is a well written teen novel and the fist in a new series. It is out now. Click here to go to Michelle's website.
Who wrote this? Tina at 12:59 am