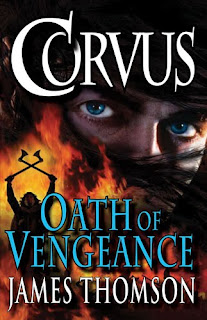 I am extremely chuffed to feature our friend Darren from Bookzone 4 Boys here at MFB. I love Darren's blog but due to a hectic work schedule for both of us, we've not had much of a chance to chat recently. So when he sent me a message yesterday saying that he's just finished reading a YA novel, centred on Vikings, I thought: brilliant! I must get that to read. Then he offered me the review for Viking Week and I was over the moon. But, over to Bookzone:

OK... we all know that vampires are pretty damn cool, although they would be no match at all for ninjas in a “Who is the coolest” contest (unless they were vampire ninjas like in Nick Lake’s Blood Ninja). We also have cool werewolves courtesy of Steve Feasey’s Changeling series, and then there’s the multitude of cool zombie stories around these days. I bet if you asked a group of teen boys and girls what the coolest book or movie “vocations” are it would be one of the above. I think I would also be safe in betting that not one them would laugh in the face of popular opinion and vote for Vikings!

Why is this? After all, if you look at the evidence then Vikings should at least be making a regular appearance in the Top 5. They were, after all, some of the greatest adventurers the world has ever known. They travelled far across Europe, even reaching North Africa, and battled the vicious waters of the Atlantic Ocean, making it as far as America in their wooden ships. They had a great mythology, with stories of Valhalla, Ragnarök and a God for almost every occasion (including, of course, the mighty Thor). And above everything else, their prowess in battle is also legendary, so much so that we “celebrate” their memory every time we go berserk. Not bad for a bunch of farm boys who initially only set out to find more fertile land.

So just why is it that Vikings do not appear to be a popular theme in YA and children’s books? Is it a fault of our education system? After all, last time I looked neither vampires, ninjas or zombies were in the National Curriculum. Or maybe it is the fact that the Vikings have a reputation for having pretty much pillaged, burnt, looted and murdered their way across most of England. Does this make them a subject that authors have been scared to tackle for fear of being accused of glorifying these violent excesses?

Whatever the reason for this dearth of Viking stories, one author has now decided to go against the trend, and in doing so James Thomson has delivered an action packed adventure romp that deserves to be big hit in the young adult market. How’s this for a synopsis?

Corvus Gunnarson returns home after a period of exile to find his parents murdered and his two sisters captured by the ruthless warlord Wulfric Cold-blood. Corvus swears an oath of vengeance and sets out to find Wulfric and rescue his sisters. His quest takes him on a journey from the fjords of Norway to the shores of Saxon England and beyond. On his journey he encounters giant sea serpents, armies of warriors, knights and shape-shifting berserker wolves. A thrilling, epic tale of bravery, honour and revenge.

Corvus: Oath of Vengeance is the first book in a new series following the adventures of the book titular main character. And it does exactly what it says on the tin book cover. Bravery? Corvus possesses this by the bucket load, and proves this in battle scene after battle scene. Honour? When Corvus makes an oath he has no intention of ever breaking it, even if he risks angering the Gods. And revenge? The thirst for vengeance drives Corvus throughout the story.

Unusually for a YA book, the main character is an adult. Corvus’ age is not actually mentioned in the text, but the description of him would make him 18 or 19 at the very youngest, but as he has spent at least a couple of years fighting for the King of Denmark my best guess would be that he is in his early twenties. Despite this I think this story has great appeal to the 11+ age range, and I don’t think they will have too many problems identifying with Corvus. They will be able to sympathise with the anger he feels at the injustice suffered by his family at the hands of Wulfric. But whereas modern boys may have a quick scuffle when they are angry with someone, Corvus sets off on a journey to another country with an axe in each hand, and boy does he know how to use these axes in a fight. The battle scenes are very well written; they are breathless and bloody – just the way we like them. Lines such as “slicing his arm in two”, “[the axes] cut deep, virtually severing his leg above the ankle” and “the patch of earth in front of him tuned red with gore” are just three of the phrases we are treated to as Corvus hacks his way through the foes that he finds himself up against. And then there’s the Blood Eagle, the Viking torture method of choice – just go look it up on Wikipedia!

When I was in my teens I devoured the Conan books by Robert E. Howard and L. Sprague de Camp, and elements of Corvus remind me very much of those. Conan regularly found himself fighting against seemingly insurmountable odds, and the same is the case for Corvus. The two characters also share a strong sense of honour – Corvus certainly isn’t your everyday raping and pillaging kind of Viking. In fact, he is more likely to fight for a Saxon village than against them. And finally, like Conan, Corvus is a born leader, even if he does not yet realise it for himself, and he forges bonds with a number of secondary characters who then happily follow him into battle.

I am a little ashamed to admit that had I seen this on a shelf in a book shop I probably would not have bought it – I would never have thought I would find a Viking story so appealing. My thanks therefore go out to Graeme Maynard at Boxer Books for sending me a copy and thereby showing me the error of my ways. This book is a definite page-turner and kept me captivated throughout. Like most first-in-series books it does end on something of a cliffhanger with many loose ends left untied, but many kids, and boys in particular, will not mind this, as like me they will feel hungry for more and look forward to the release of the second book in the series.

Fab! I love the whole premise, as well as the main character's name: Corvus. Strong indication there of ties to Odin, with his crows and such!

Thanks Darren, for this review and for taking out the time to do it, it's much appreciated.