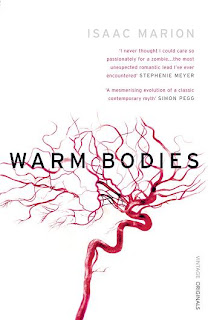 'R' is a zombie. He has no name, no memories, and no pulse, but he has dreams. He is a little different from his fellow Dead.

Amongst the ruins of an abandoned city, R meets a girl. Her name is Julie and she is the opposite of everything he knows - warm and bright and very much alive, she is a blast of colour in a dreary grey landscape. For reasons he can’t understand, R chooses to save Julie instead of eating her, and a tense yet strangely tender relationship begins.

This has never happened before. It breaks the rules and defies logic, but R is no longer content with life in the grave. He wants to breathe again, he wants to live, and Julie wants to help him. But their grim, rotting world won't be changed without a fight...

I’d heard about Warm Bodies before Santa dropped it off at Christmas, and up to that point I’d not been able to convince myself to give a go- a zombie/human romance? Huh? No, thank you, that wasn’t quite my cup of tea. After the shameless abuse the monsters of old have received in recent years the last thing I wanted to do was suffer through the experience of my beloved zombies going shiny and emo.

Christmas passed, and I returned to work, and conscious that W.B remained untouched on the shelf I slipped it into my very macho man-bag as my commuting read.

‘R’, the main character, is a zombie. As part of a small herd/ pack, he hunts, kills without mercy and eats the living, delighting in the texture and the high that fresh brain tissue imparts. Isaac doesn’t shy away from this, which is really important- without this, the core of the story would lose its impact.

W.B is told in a first person perspective, so you get to know ‘R’ from the first page, and through his eyes and thoughts Isaac takes us into the midst of the herd and the weird, bittersweet semblance of social order that some remnant of their minds cling to. But R is the star of the show, and a random encounter with a stray group of living survivors sets in a motion a series of events that spark a strange and long forgotten feeling inside him. Is something happening to him, or is it simply mental indigestion from the brain he’s just eaten- the brain of a boy who once loved the girl he just died defending? R doesn’t know, but it stirs him from the lethargy of his undead existence and, fired by curiosity, he takes the traumatized Julie to his ‘nest’ amidst the horde, hiding her from the hungry dead around them like a dog with a bone.

The story unfolds as R struggles to come to terms with feelings he no longer remembers and cannot express. Tormented by the memories of the boy he ate, a ghostly presence seeking its own redemption, R’s journey is a gradual one. It’s handled with a deft touch that makes it seem believable and leaves you rooting for them as the ripples of what he and Julie are experiencing spread, setting up a confrontation with something dark and terrible.

Warm Bodies was as fun to read as it was engaging. A very pleasant surprise overall, and I finished it in three sittings, which is always a good sign!
Who wrote this? Mark at 9:00 am

I've never read a zombie book before and this sounds like a cool way to start. I might just have to order it. Thanks for a great review.

I haven't read this yet but I hear it's a bit good. Glad you enjoyed - that usually means I will too ;)

I've not read any zombie books before, but it sounds like this is the one to read! Great review :)

I'm really curious to read this one. It sounds really interesting! Great review.