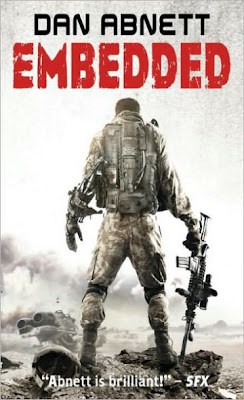 The colony planet of Eighty-Six looks as dull as all its fellow new worlds to veteran journalist Lex Falk, but when a local squabble starts to turn violent, and the media start getting the runaround from the military high command, his interest is seriously piqued.

Forbidden from approaching the battlezone, he gets himself chipped inside the head of a combat veteran – and uncovers the story of a lifetime. When the soldier is killed, however, Falk must use all his resourcefulness to get back home again… and blow the lid off the whole damn thing.--
It was always going to be interesting to see what direction Dan went in when he slipped off the Black Library reservation, and I was very pleased to see that he was staying firmly in military sci-fi territory.

Embedded is set on a newly colonized world designated ‘Eighty Six’, and set in a future that’s not so far off as to feel remote, and a bit worn around the edges. There’s no obvious info dump waiting in the shadows, which is nice for a sci-fi. But then the concept of colonization of new planets has been out there for a while, so it’s easy enough to get on board with the basic idea about what’s going on. The finer details are gradually eased in along the way as Falk starts nosing around, the scent of a major story lifting him from the bone-deep fatigue that has become as much a part of him as his cynicism.

What gives Embedded that essential air of authenticity is that Dan understands that whatever gadgets and impressively destructive weapons the soldiers on the ground have available, at the end of the day those are just tools, and it all comes back to the men who wield them. It’s their ability to work as a team that makes the difference between success and failure, life and death. The same is true for the story- it’s the characters that make it work, not the geegaws they’re playing with. And again, this is something he keeps in mind throughout; the main characters are sympathetic, well defined individuals you want to care about, more so when the shit inevitably hits the fan. It’s what makes Falk’s unexpected stint in the veteran’s head work so well.

Having said all that, the weapons and equipment are cool. Many of the weapons are almost familiar (in the way a house cat resembles a sabretooth), likely extrapolated from existing weapons systems, but far nastier than anything you’ve seen before. But there are also some new toys, particularly beam weapons that make Star Wars’ blasters look like nerf guns. There’s no such thing as a flesh wound here- the action is furious and hard hitting. The tech isn’t overwhelming, and is as integrated into the character’s day to day lives as mobile phones are in ours; there’s nothing flashy on offer to draw the spotlight away from the characters or the story.

And it’s a great story, a dangerously more-ish mix of corporate engineering and boneshaking action. It feels fresh, it’s accessible to everyone and permeated with the vivid and immersive action that's become Dan's trademark. I devoured it in a couple of days and my only complaint was that there wasn’t more of it! Lovely stuff.
Who wrote this? Mark at 8:00 am

I see you really enjoy this book. You've peaked my interest. Thanks.

chip in the head? Very Rogue Trooperish. I am looking forward to this one!