The Dragonsdome Books are by an author called Lucinda Hare.  I had not heard of them until I was approached by Random House to ask if we would be interested in being part of the blog tour.  It took me about ten seconds to say yes, after I read the information sheet they supplied to accompany the request.  Dragons.  Evil Hobgoblins.  Magic.  Dwarfs. Quests.  It was as if I was targeted by Lucinda Hare and her publicity people! I fear my tastes have become too well known! What to do...what to do...

For me, and everyone else, I think, dragons are very much a European thing and an Asian thing.  So when Rosi at Random House sent me the a blogpost entitled:  Native American Culture and its influence on Lucinda’s writing I thought...what...the hell? It made no sense to me.  I'm pretty sure there aren't dragons in Native American lore...But then, gentle reader, I picked up a copy of The Dragon Whisperer and read it and loved it to bits and then the guest blog I had subsequently received made sense.  I am such a Thomas.

Here then is the very awesome blogpost by Lucinda Hare - and it is genuinely a superb blogpost, especially for aspiring writers as it covers quite a bit of world-building and taking what's contemporary and your own interests, and swinging it to make it relevant to your story.


***
I’m often asked where I found the inspiration for my dragons’ names like Two Gulps & You’re Gone? Well, dragon names, the months of the year, and the hours of the day are all inspired by my passion for Native American culture, as is the core idea of The Dragonsdome Chronicles: talking to animals, in this case dragons.

With my childhood and my heart firmly rooted in the countryside, I have always loved the natural world and the feathered, and furry four-legged friends who share it with us; they are at the core of my family’s life and my stories. Animals also play a key role in Native American cultures. They are not exploited but respected; they are seen as teachers and guides and companions, their gifts and wisdom shared; their existence key to our own survival. Of these many traditions, animal totems and animal speak are beliefs embedded in the heart of The Dragon Whisperer, given voice by Quenelda, a young girl who can talk the language of the dragons, who will have to confront in Flight to Dragon Isle some of the many examples of exploitation and cruelty towards them that exist in our own world, who struggles to give them a voice where others see and hear ‘only animals’. Rescuing and re-homing injured, old and behavioural problem animals means you have to learn their ‘language’ (behaviour, movement, character and vocalisation), both as a species and as individuals, from dogs and feral cats to abandoned baby wood mice: this has led friends to call me an ‘animal whisperer’.
What I was going to name my talking dragons was one of my first challenges as an author. I did not want to name them the way we commonly name our pets as this did not do justice to these magnificent magical creatures. Sooty the dragon does not work and Fluffy is out of the question! Nor did I want the overly romanticised names so common in science fantasy. I wanted something gritty and evocative; something that reflected the reality of a scaled, fire-breathing, six-taloned nightmare the size of a football pitch bearing down on you. I also wanted names to reflect each dragon's breed and individual character.
﻿
﻿ So I turned to my lifelong interest in and admiration for Native American cultures and their name giving ceremonies; where a name is given that has special meaning reflecting each individual’s unique personality. Traditionally this name would be given during a ceremony by tribal elders or a medicine man; a ritual handed down from generation to generation. The name chosen might suggest itself in a vision, or a pipe ceremony or at dream time. A wonderful example of what I mean is Kuwanyamtiwa, a Hopi name meaning 'beautiful badger going over the hill'. Work that one out if you can! Hakidonmuya is another Hopi name meaning 'time of the waiting moon.' Kaliska is a Native American Miwok name meaning 'coyote chasing deer’. Where we can, we name our own pets in similar fashion. For example we gave the name Chinook to a gentle little feral cat (no longer feral, but it took years), who is as free and gentle as the warm coastal winds that blow where the Canadian prairies meet the Great Plains of America.

Where I cannot claim to know of the traditional rites handed down from generation to generation I have given my dragons names that are true to these principles. Thus Imperial Blacks, the greatest of all dragons, were given names like Stormcracker Thundercloud III, Dangerous & Deadly, and Leave in Smoking Ruins. All names that would strike fear into their enemies. Another key battledragon is the boastful and proud Sabretooth that Tangnost and Quenelda are trying to treat without getting frazzled to a crisp. Sabretooths are cave dragons with huge incisors and an appetite to match, so Two Gulps & You're Gone struck me as ideal. He would have at least a dozen hobgoblins for dinner! But Chasing the Stars is the name given to Root’s gentle mare whose character is inspired by our own little Chinook.
﻿ ﻿﻿
﻿﻿The medieval magical world of the Dragonsdome Chronicles has nothing in common with our modern day and age of high-rise cities, the internet, cars and planes. Yes, there is magic, but like technology, it has its limits. How can even a mighty Imperial Black battledragon fly in a howling blizzard? So, how do you measure time in such a primordial world? When you are world building it is good to find a different language to describe familiar things, and once again I turned to Native American culture to come up with ideas for such a wild, untamed world. There was a time not so very long ago when our very survival was tied to the rhythms of nature and the changing of the seasons, and thus time was measured by the cycle of the full moon. Full moons dominate the night sky and have attracted unique names of their own that reflect those seasons. I have borrowed Native American names for full moons below, with some alternative names in brackets; but this personal choice reflects only a fraction of the many tribal variants such as Abenaki, Cheyenne, Cherokee, Comanche, Kiowa, Lakota, Mohawk, Potawatomi and Shoshoni that exist. Those in bold print represent those adopted by the American Indian Association. Some of these names may be familiar to readers in the UK: I grew up calling September moon the harvest moon, and October the hunter’s moon.

I took a light hearted approach to the hours of the day and years; although they draw upon the same inspiration they are entirely fictitious. Flight to Dragon Isle opens with the new year of The Sabretooth Dormouse, and hours of the day are in the same vein but with a distinctive Scottish twist: 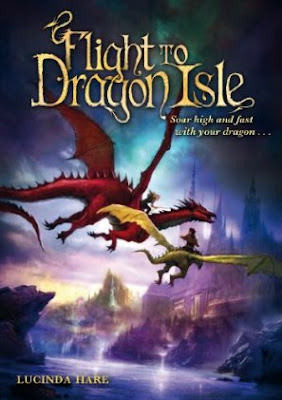 Native Americans see themselves as stewards of the earth and all its inhabitants - man and beast - not owners. They recognize the symmetry and balance in nature and, unlike modern societies today, respect our environment and all its diverse and unique life forms. Quenelda’s world is equally imperfect, but through her, I hope to give animals a voice.

Thank you so much to Lucinda and Rosi for letting MFB be part of the tour.  We wish Root and Quenelda the best of luck with all their travails and I look forward to sharing my two reviews of the Lucinda's books with MFB readers.

Please do visit Lucinda's website - she is a talented artist and has spent some time creating superb pieces from the books.