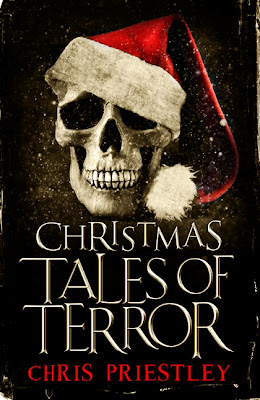 From malevolent snowmen to Father Christmas - with a difference ... Chris Priestley is on absolute top form in these atmospheric, clever and thoroughly chilling stories. Add a new kind of thrill to the fluffiest of seasons with seven brilliantly conceived examples of why you'd better be good at Christmas time. For stories which can be enjoyed by the whole family, unwrap these perfectly formed festive tales of terror, each with a gripping yarn and genius twist.

Singing carols may never seem quite the same again ... especially after dark.

Ever since I cracked open Uncle Montague's Tales of Terror back in 2008 I've been a fan of his blend of the macabre and sinister, and since I'm a sucker for all things Christmassy, there was no way I was going to miss this one. The question I needed answering was whether he was going to maintain the high standard I expect from him or if the edginess of his work was going to be eroded by a capitulation to popular sentiment. CToT -currently only available as an ebook-features seven short stories, opening with 'The Green Man'.

The Green Man tells the story of Stephen Levenson, home for the christmas holidays and trying avoid arguments with his mother. What he finds this year though is that his mother has embraced a spirit of change and has had his stepfather gather armfuls of holly from the ancient hill on their lands, a hill that his father had taught him never to trespass on. His intention to avoid arguments crumbles as he tries to fathom why she would do such a thing, but for the sake of a good Christmas, he grits his teeth. But the fear and respect his father treated the hill with weren't misplaced, and when night closes over the house there's more than Santa's generosity to worry about. The twist left me staring at my kindle mouthing 'whoa' for a moment before I greedily tabbed into the rest of the stories.

Trying to decide which of the seven was my favourite has been far harder than I thought it would be. Each has so much going for it and the quality of the writing and the sheer macabre wonder of the twists in each is consistently high. After annoying Liz by thinking out loud (aka arguing with myself like a madman), I've decided on "In the Bleak Midwinter" for the sheer tragic horror of it. It's also, now that I think about, the only one of the stories that doesn't see any of the characters dying..!

Midwinter starts off nice enough, with choirboys from the local church out carol-singing to raise money for repairs to the church roof, and quietly skimming a small percentage off to divvy out amongst themselves. Amongst them is Simon, who unfortunately owed the local bully a wad of cash after succumbing to the recent craze of playing cards. When the others decide to call it a night, Simon argues for them to do a few more houses, but is outvoted and they start heading back to the village, guided by the light of their sole lantern and singing for the fun of it. It's then that one of the other boys says that they shouldn't be singing in a graveyard. Of course, in the way of boys around the world, they immediately begin to sing louder.. and soon discover that they should've listened to their friend. What follows is so wonderfully chilling it makes me weep to think that of the drivel that the BBC is wasting money on instead of bringing stories like this to more people.

Suffice to say I should never have doubted that Priestley would deliver anything less than a smorgasbord of dark delights. Do what you must, but buy a copy of the Christmas Tales of Terror for whatever e-reader you have. Read them to your kids or save them for yourself. You won't be sorry.

You can visit Chris's website here or visit his blog here.
Who wrote this? Mark at 8:00 am

I read this one just before Christmas, sent some delightfully unseasonal shivers down my spine! ;)