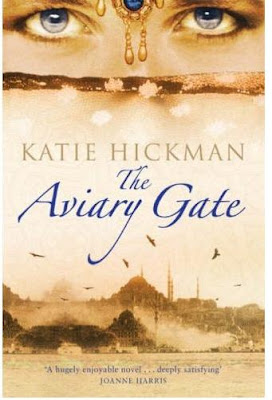 Elizabeth Staveley sits in the Bodleian library, holding in her trembling hands a fragment of ancient paper. It is the key to a story that has been locked away for four centuries, the story of a British sea captain's daughter held captive in the sultans harem.
Constantinople, 1599. There are rumors and strange stirrings in the sultan's palace. The chief black eunuch has been poisoned by a taste of a beautiful ship made of spun sugar. The sultan's mother faces threats to her power from her son's favorite concubine. And a secret rebellion is rising within the palace's most private quarters.
Meanwhile, the merchant Paul Pindar, secretary to the English ambassador, brings a precious gift to the sultan. As he nears the palace, word comes to Pindar that the woman he once loved, Celia, may be alive, and hidden among the ranks of slaves in the sultan's harem. Can this really be the same Celia who disappeared in a shipwreck? And if it is, can the two be reunited?
******
I was absolutely thrilled to receive this from Bloomsbury and couldn't wait to get stuck in, having read Katie's previous book, Daughters of Britannia and thoroughly enjoyed it.
Allow me to share the first line of the one page Proluge with you and tell me, honestly, that you do not immediately want to go make some tea, get some biscuits out and settle down in a quiet spot to read this in one fell swoop!
The parchment, when Elizabeth found it, was the amber colour of old tea, frail as leaf mould.
Just that one line hooked me, and I had to have more. Immediately!

The book is set both in present day, moving from Oxford to Istanbul, and in the past, in the year 1599 with the setting being Constantinople (now Istanbul).

Katie Hickman using a guile to tease out the story of Celia Lampard, her fiance Paul Pindar and the scholar, Elizabeth Staveley, who is researching their story in modern times.

She gives a fascinating glimpse behind the scenes of the Sultan's Harem. Her research is immaculate and her characterisation stunningly vivid. Her prose is rich and luxurious but not nauseatingly flowery. She writes well, with a good grasp of the lives of these hidden women. The book abounds with political intrigue, romance, spies, poisons and spoiled concubines.

This is an excellent read and it masterfully written, bringing several storylines together in a very clever finale. My only regret is that it had to end!

I initially didn't much like Elizabeth as she came across as a bit aloof but then the author cleverly revealed Elizabeth's innate sadness and the dislike evaporated. There are some amazingly strong female characters in the book, such as the Sultan's mother, who is ruthless, cunning and a highly intelligent manipulator. She is a catalyst for much that happens in the story and genuinely found myself warming to her although you knew that she might not be the nice lady she pretended to be.

I would really recommend this book for a long slow luxury read.