Kat Richardson Signing at Murder One - The Event

Mr. Kat, Kat (in the middle), Donna from Piatkus 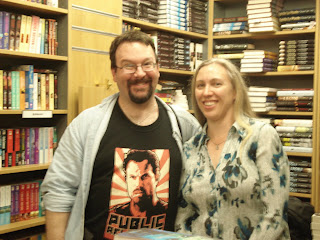 Mr. Kat and Kat (and Jayne from Serenity on T-shirt) 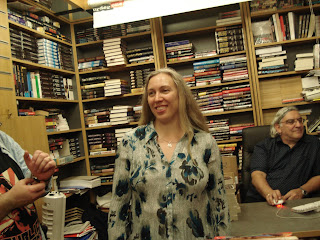 I was really nervous going into Murder One today to meet Kat Richardson. I've been to uncomfortable signings before where the author tried really hard to be kind and generous with his / her time but in the end just too many people made demands on their time and things became a bit rushed and stilted.

This even though was one of the quietest I had been to as yet, and also probably the scariest. We were a handful only. And to give Kat and Mr. Kat their due, they rose to the occasion and really treated everyone who came out to meet them with kindness and genuine warmth.

Trisha who looks after the romance/paranormal romance section at Murder One is an absolute darling and quickly made sure everyone was at ease. Donna from Piatkus oozed friendliness and had hugs for all. Kat and Mr. Kat regaled us with their travels around London, their other writerly friends in Seattle and gave us an interesting insight into what life was like for authors with works in progress. I took the snaps above, as the visit continued - it turned into more of a "get together" than a signing as other members of the public came in and out of the small romance section to pick up new books to read. We shuffled around them and vice versa. It was genuinely nice to be able to chat to Kat, Mr. Kat and Donna to find out what was being planned for the series, what was currently happening at Piatkus and just general chitchat about the most random things, from movies, to books, to other authors, book cover designs and the list suddenly seems endless. I can't remember all the things we chatted about - conversation flowed and it was altogether shocking how quickly two and a half hours could fly by in a blink of an eye.

Many thanks to Trisha, Kat, Mr. Kat and Donna for a fantastic signing - I really had fun and came away clutching my signed copies with absolutely glee.