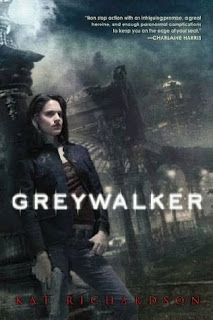 Kat Richardson pulls off a very credible and well-put together heroine called Harper Blaine in this first instalment of the Greywalker series.

The book opens with a general fantasy no-no - a massive jaw crunching head banging fight where we find Harper giving as good as she gets. But the fight scene works well because it serves to tell us a lot about Harper. She is resourceful, clever, doesn’t give up, she knows when she needs to beat a hasty retreat and to hedge her bets. She makes her escape, but only just. She suffers severe head trauma and dies for just under two minutes. The head trauma allows her to see and step into the Grey, making her a Greywalker, as someone who can move in both the mortal world as well as that of the Grey.

During the course of the book she fights her new perception of the world and it is told in a sympathetic but no nonsense way. The introspection is limited and it works to enhance the strong character of Harper. She does not fall into the arms of the first trendy undead person she meets. She works things through in a very logical and progressive way and it was refreshing to find that Kat did not stick with stereotyping the various characters that Harper meets along the way.

Greywalker is one of those rare books that works well on several levels - as a all round good book to read because the main protagonist is someone who can kick butt and chew gum at the same time and looks good doing it; it is a supernatural mystery with two very interesting cases being worked at the same time. The cast of characters seem to live their lives and isn’t there just to help her out (I tend to call it Living in Pause). Kat’s style of writing is clear and crisp with some excellent one-liners. I really am looking forward to the next book, Poltergeist and will no doubt happily report back once that is under the belt.