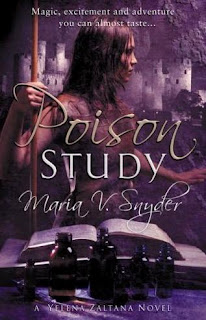 Information about Maria’s first book, Poison Study and a snippet about Maria:
Published in October 2005, Poison Study won the 2006 Compton Crook Award for Best First Novel, won the Salt Lake Co. Library's Reader's Choice award, was a 2005 Booksense pick, was nominated for four other awards, and received a Starred Review from Publisher’s Weekly. She has also published numerous freelance articles in regional magazines and in local newspapers. Teaching fiction writing classes at the local college gives her the enjoyable opportunity to encourage novice writers and to keep improving her craft.

I am pleased to say I fell for Poison Study, hook, line and well, poison chalice and I cannot wait for the next instalment which I’ve got tucked away on my TBR pile.

The main storyline is clever – Yelena is about to be hanged for a murder which she quite readily confesses to have committed. She is offered a reprieve from the executioner’s block: become the food taster for the Commander of Ixia. Or die for the murder she committed. Yelena chooses to become a food taster. Valek, the chief of security, feeds her a poison, Butterfly’s Dust, to ensure her loyalty – she has to appear every day for the antidote or she will die an agonising death. Her training as food taster begins immediately and she swots up on poisons, what they taste like, what their symptoms are under the tutelage of Valek, the chief of security, spy and assassin.

But that is only one part of the story! I won’t try and tease out the other story lines as that will give the plot away. Which would not be fair.

The book abounds with political intrigue, assassins, magicians, ruthless generals and dangers to both Yelena, the commander and her newly made friends in the Commander’s household.

The action takes place in Ixia, which is a country ruled by a benign military dictatorship, headed by Commander Ambrose who has implemented a strong command structure and a very regimented approach to managing the lives of the people in Ixia. The author describes their lives well, explaining about uniforms and pre-determined job roles and contrasting it vastly and interestingly from all the other fictions your read where monarchs and aristocracy rules.

The author’s style of writing is fast, flowing and modern. Yelena stays a constant treat as she relearns her confidence in herself and others. She comes to trust in her own prowess and is seen to grow dramatically in the book from a downtrodden, foul little creature from the dungeons to someone who is confident, openly intelligent and capable. As we learn more about her background, things become clear and you applaud her in your heart for the murder she committed in order to … well, read the book!

The story evolves and moves at a really good pace. I couldn’t believe how quickly I had finished the book, even through I was trying to drag it out. I’m not at all regretting finishing it as I know the next one is ready for me to pick up when I want to. The third book will be out shortly so I will have to pace myself.

The thing about Poison Study that makes it different is that the character, Yelena seems to be a true innocent, regardless of her back-story. However, the author managed to convey this very well with some good scenes but you are never in doubt that Yelena can be taken for a fool. She is highly intelligent, brave, honest and fair in her dealings with other characters in the book.

There is a thin thread of romance that runs through the story, which is written in very well, rounding her character off, quite nicely, helping her grow and become a fuller, more robust character.

To be honest, I can see myself re-reading this in the next few weeks again, purely as it is such a good, fun read. I am sure, like with a good movie, if I reread it, I will be able to pick up on more subtle things, which I had missed out the first time around.

I have to give Poison Study high marks – it is a really good, fun book, with an interesting setting, a well thought out heroine and various very clever plotlines knitted together to make for a rollickingly good read. I can only imagine what happens next!
Magic Study - the second installment has just been released through Mira Books and if you follow the link, you will be able to purchase it directly from the publishers.
Who wrote this? Liz at 11:29 am