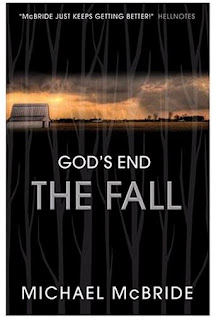 Michael McBride’s first offering "Gods End: The Fall" has all the boxes ticked to make it a classic apocalyptic novel with clever twists. It’s a clever novel, playing on current events, in the Middle and Far East, the general worry gnawing away at everyone’s minds – what happens if there is a large scale attack, or more scarily, what if it a nuclear attack? Michael McBride is a very clever manipulator, as most authors have to be, weaving fact, fiction, fantasy and religious tones into a very scary novel.

From Michael's Website
The fledgling democratic state of Iraq is invaded by Syria, triggering a series of events leading to the brink of World War III. Unbeknownst to the recently redeployed American troops, the Middle Eastern countries have formed a secret alliance, baiting the armed forces into traps both in the Persian Gulf and the now-defenceless United States. As the world speeds toward its demise, fulfilled prophecies give rise to the physical manifestations of the Four Horsemen of the Apocalypse, who usher the earth into its next phase of evolution. Pestilence's mosquitoes and Famine's locusts spread genetic mutations that alter man and animal alike, creating War’s fearsome reptilian army, The Swarm.
Faced with imminent annihilation, those who survive mankind's own extinction agenda must find each other across a rapidly changing landscape to rally their numbers in the face of Death's legion of genocide. Will humanity prove itself worthy of surviving to usher in a new era of life on earth…or will it succumb to God's End?
The novel is written very cinematically. Fantastic descriptions are used, but not flowery prose, I hasten to add. The surviving characters are interesting and well drawn. There are some very vivid and startling scenes that stayed with me after I read them and I would say that if you are a fan of the horror genre, you will be able to pick out the influences immediately. There is definitely Hitchcockian overtones with a bit of Poe and Stephen King mixed in. What is interesting is to follow the group of survivors and see how the author manages to bring them all together and then rudely leave us at the end of the book in a worthy cliff-hanger.
I get the impression that the first book was written in a burst of writerly creativity and it is going to be interesting to see how the story progresses into the next two books. I am pretty certain that he’s honed his style on this one and even though there are a few rough edges, which can be forgiven as it is quite a difficult thing to write, bringing a handful of character successfully together, the next two books in the series will be more slick.
A worthy edition to any horror / sci-fi / futuristic reader’s shelf.
Who wrote this? Liz at 10:26 am