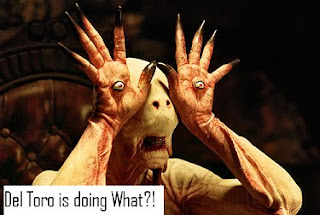 From the BBC website:
Director Guillermo del Toro has announced plans to write a trilogy of vampire novels with crime author Chuck Hogan.
The 43-year-old, best known for making Pans Labyrinth, Hellboy and The Devil's Backbone, said the trilogy would advance in "unexpected ways".
The first book, The Strain, will be released next summer.
Earlier this month it was reported that del Toro had signed a four-picture deal with film studio Universal.
Trade magazine Variety said the deal would tie him up for the next decade.
There are plans to remake Dr Jekyll and Mr Hyde, Frankenstein and Kurt Vonnegut's Slaughterhouse Five.
Del Toro has also been lined up to direct two films based on The Hobbit and other works by JRR Tolkien.
However, the Mimic director has a very clear idea of how the books will read.
"Each book contains unique and surprising revelations about the history, physiology and lore of the vampiric race, tracing its roots all the way back to its Old Testament origins."
Hogan's novels include The Blood Artists, The Killing Moon and Prince of Thieves, which is being adapted into a feature film, starring and directed by Ben Affleck.
LARPERS and Cosplay peeps, he is clearly making this one just for you!
Who wrote this? Liz at 3:01 pm