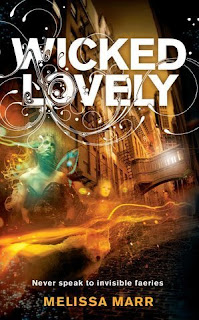 The clash of ancient rules and modern expectations swirl together in this cool, urban 21st century faery tale. Rule #3: Don't stare at invisible faeries. Aislinn has always seen faeries. Powerful and dangerous, they walk hidden in the mortal world, and would blind her if they knew of her Sight. Rule #2: Don't speak to invisible faeries. Now faeries are stalking her. One of them, Keenan, who is equal parts terrifying and alluring, is trying to talk to her, asking questions Aislinn is afraid to answer. Rule #1: Don't ever attract their attention. But it's too late. Keenan is the Summer King and has sought his queen for nine centuries. Without her, summer itself will perish. He is determined that Aislinn will become the Summer Queen at any cost! Suddenly none of the rules that have kept Aislinn safe are working any more, and everything is on the line: her freedom; her best friend, Seth; her life; everything.

I have heard some genuinely good things about Melissa Marr's writing (thanks Karen!) and was therefore very chuffed to find a copy of Wicked Lovely at my local Waterstones on Oxford Street.

And in a testament to how engaging I found the book, I read it in one evening.

The story is as old as time itself...a faerie lord desires a human girl, he declares his desire and that girl stands no chance, at all. A bit unfair, I always thought. What chance does this poor girl stand? She doesn't even put up a token resistance. What a farce.

Marr takes that opinion too and has Aislinn be the one to stand firmly against Keenan. She finds him beautiful yes, scary and annoying, but she fights and does not give in. She refuses to be swayed, to fall under his spell. She clings to the teachings her Gran taught her and she clings to Seth, a boy who is as remarkable as a human can be, when contrasted against the glory of Keenan, the Summer King.

An interesting counter-point to Keenan's belief that Aislinn is "the one" we have Donia, the Winter Girl, whom Keenan thought many years ago to "the one" too. I found Donia's story to be heartbreaking. Still in love with Keenan, after so many years, but being unable to be with him, she has to watch him go through years and years of young girls, whom he tempts into taking the test, to be "the one". None of them chooses to take the test...instead they become part of a group of young female fae called The Summer Girls. Donia is trapped as the Winter Girl until someone can be convinced to take up the challenge to become the Summer Queen and succeed.

It is a deftly written book. Aislinn's character is a well developed and initially I thought she was going to be a flash in the pan, blindly following Keenan but once she showed some backbone I cheered her on. Seth remains remarkable as her best friend and later, as something more. He does sound delicious, I have to admit. Keenan could so very easily have become a one dimensional character - obsessing about Aislinn, but we are introduced to his inner turmoil by the small interludes he has with his mother - who is, in plain words, a bitch. He is fighting for his own existence and that of his court, and importantly, in a roundabout way, for the continued existence of humanity. His mother has managed to browbeat him so much that he sulks, like a petulant child, until Aislinn stands by him, voluntarily to ward off the Winter Queen.

I punched the air in glee, going "yes!" when I read that section. But all is still not well. Aislinn has definite ideas about being her role in all of this. She is a clever negotiator. Keenan is taken aback and we find Donia's heart breaking as she watches it all from the sidelines.

I really enjoyed reading Wicked Lovely much more than I thought I would. It ranks, to me, up there with Holly Black's Tithe in the YA Urban Fantasy genre. It's written with a new slant, an unwilling Queen who remains unwilling but does what she has to do because it is the right thing to do in the end. It shows true friendship, it highlights the loneliness of someone in a role of responsibility and how hard it is to break out a role which others have created for you, so that you can be your own person.

Melissa Marr has quite a following and you can find her site here - if you follow the links to her livejournal site, do check out some of the youtube videos fans have made of the book. Excellent work!
Who wrote this? Liz at 1:30 pm

I loved this book...but wow that cover is really different from mine! :) (fantastic review by the way)