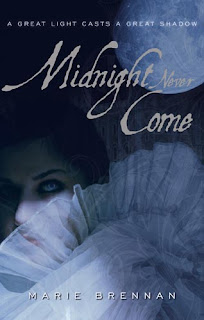 England flourishes under the hand of its Virgin Queen: Elizabeth, Gloriana, last and most powerful of the Tudor monarchs.
But a great light casts a great shadow.
In hidden catacombs beneath London, a second Queen holds court: Invidiana, ruler of faerie England, and a dark mirror to the glory above. In the thirty years since Elizabeth ascended her throne, fae and mortal politics have become inextricably entwined, in secret alliances and ruthless betrayals whose existence is suspected only by a few. And two courtiers, struggling for the favour of very different royal patrons, are about to uncover the secrets that lie behind their thrones. What they find has the potential to fracture both worlds.
This is a breathtaking novel of intrigue and betrayal set in Elizabethan England.

The novel opens with a scene set in the Tower of London, where Elizabeth is held prisoner, awaiting her execution. A mysterious stranger appears, offering to help her. The stranger is called Individiana. A pact is made. The story unwinds and we are swept up in the passions of Elizabethan England. This single opening scene genuinely sets the tone of the rest of this political faerie spy novel set in Elizabethan England.

I admire Marie Brennan greatly as an author and researcher. Her hard work shines throughout the book and brings historical figures to vibrant life. We meet courtiers and fae alike, and it is difficult to tell which Court has more political intrigue, spies and traitors.

The book reflects the tremendous changes occurring in the world at the time - seafaring nations going to war, the battle between Catholicism and the Protestants, the flowering of poetry and literature across the known world, the expanding of ideas in sciences, the occult and technology.

Ms. Brennan holds the book together with tight plotting and immense characterisation. Personally, I feel the book should be read in conjunction with watching the first Elizabeth movie which stars Kate Blanchett. They definitely compliment one another.

The characters we meet as the story unfolds, Walsingham, Elizabeth herself, Lady Lune (nee, Ann Montrose) and Michael Deven, John Dee and other gentleman and ladies, inhabit a world so close on the cusp to the real and unreal that it becomes a bit of a struggle to sort out fact from fiction. The storylines are so closely linked to reality and spliced so finely that you have to take a break and think to yourself...it is just a bit of fiction, right?

The author worked really hard in only making use of English faeries and in her interview in the back of the novel, I came to realise that what she said is true: the majority of stories we know are European, Cornish and Welsh (Celtic) and Irish faerie tales. She embroidered the myths and legends of London into her novel with such effortless ease, I found myself crossing the Thames on the train the other day and greeting Father Thames very quietly, just in case.

The book is written with painstaking detail yet never for a second does it become a boring retelling of historical facts and a rehashing of already known figures. Elizabeth is particularly well portrayed and I relished in her intelligence and skill as a monarch. We watch the Courtiers jockying for power, wondering how it is going to turn out and when things totally went awry, I wanted to put the book down and not read further. But I felt compelled to do so. I had to find out how it ended.

The story is a slow-burn, intially, with characters being fleshed out and scenes being set, but once the author pulls the rug out from under Lune and Michael Deven, it is interesting to see who steps up to the mark to sort out the threat and then the story genuinely rolls forward at a rapid pace.

A good read, especially if you are a fan of the time period. I've copied the bit below from The Book Swede's site: And Ashes Lie is the next book in the Onyx Court series, it's a sequel of sorts, with continuity among the faerie characters, but definitely something that a person could pick up without having read Midnight Never Come. It'll cover the period from 1640 to 1666 -- in other words, the English Civil War, the Interregnum (when they chopped the head off Charles I and drove Charles II into exile), the Restoration of the monarchy, and then the Great Plague and the Great Fire. It's an action-packed span of time; if Midnight Never Come is my Elizabethan faerie spy novel, And Ashes Lie is my Stuart faerie disaster novel.

You can find the Midnight Never Come site here and her actual website here.
Who wrote this? Liz at 12:45 pm

Oh, I've heard of 'Midnight never come' - maybe I should check it out sometime. Political intrigue is always good.

Thanks for the mention, and a very good review :)

Excellent review. I will be the book next month. Looking forward to read it.