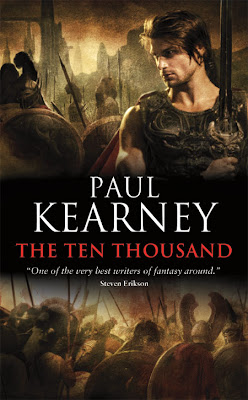 On the world of Kuf, the Macht are a mystery, a seldom-seen people of extraordinary ferocity and discipline whose prowess on the battlefield is the stuff of legend. For centuries now, they have remained within the fastnesses of the Harukush Mountains. They have become little more than a rumour.

In the vast world beyond, the teeming races and peoples of Kuf have been united within the bounds of the Asurian Empire, a continent-spanning colossus. The Empire rules the known world, and is invincible. The Great King of Asuria can call up whole nations to the battlefield. His word is law across the face of the earth.

But now the Great King’s brother means to take the throne by force, and in order to do so he has sought out the legend. He hires ten thousand mercenary warriors of the Macht, and leads them into the heart of the Empire.


When we meet Rictus, he’s made peace with the fact that he’s about to die. What he doesn’t realise is that fate has other plans for him, plans that will see his youth burned away in the forge-heat of battle.

I wasn’t quite sure where the story was going at first; having the hero spitting blood and making peace with his gods isn’t how I expected things to start. The setup is the snowball tipped over the edge of the mountain though. It builds on itself and becomes a thundering behemoth that bullies you into staying up late at night with the promise of ‘one more page’.

Paul paints a wonderfully gritty, solid feel to the legion of the Macht. The Kuf are rendered both exotic and mundane, alien and human.. but it’s what happens when these worlds collide that gives the second half of the book that extra va-va-voom that keeps you turning the page long after you should have turned the lights off. The battles bring the filth, fear and brutality of war to vivid life; the desolation of the aftermath lingers long after the swords are sheathed.

I'm pretty fussy when it comes to action; Liz can attest to the number of books I've binned after losing interest in a character's fate; I'm happy to say that Ten Thousand was never in danger of sharing their ignominious fate.

If you’re looking for intelligent action, look no further. Give those nice people your money and take Ten Thousand home with you.

(I'm still pretty depressed about Jason though. Poor bugger.)
Who wrote this? Mark at 10:29 pm