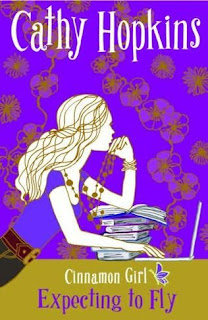 India Jane's under pressure from all corners
It's decision time for India Jane: what subjects she needs to take, what career paths are open to her – and who she wants as her boyfriend.

On the one hand she feels that she's standing on the threshold of her future, with hopes and dreams to fly with. On the other hand, the harsh realities of life mean that her dreams and the boys in her life never go according to plan!
The fourth book in the Cinnamon Girl series.

I'm not one for overtly girly books. But as I said before, I should know by now, not to judge a book by it's cover or it's initial impression.

I am so vastly pleased I've read this book by Ms. Hopkins. I wish I had this to read when I was the same age as India Jane and still at school. We also had all this pressure on us to decide on what subjects to study, as these would directly influence your career choice. It was insane and scary and I still vividly recall the terror of that time.

Which is why I can probably relate to Ms. Hopkins' writing so much.

Yes, it's quite a girly book but not in the sense that it is candyfloss and a bit silly - the dollops of realisim is there, in the way that it deals competently with getting your first steady boyfriend and where do you go from here? Do you suddenly go blind to all the lovely other boys in the world who notice you and who you definitely notice back? CG shows us how families stick together (even if they are weird and a bit hippie-like) and how you make a go of things, no matter what, and to remain positive. It reflects how various generations can help each other and it deals with relationship upsets, how to stay best friends, how to make decisions about your future...it's a pretty hard-core book, actually, that has some truly valuable lessons adequately camouflaged in this neat little package of unputdownable reading.

Needless to say, I really enjoyed it. It's my first ever Cathy Hopkins book. The lovely Chicklish was laughing at me yesterday as I was gushing about it on twitter and she pointed out how like me to find a series near the end and love it regardless. I suppose this is true and it's my own fault for determinedly walking past these in the past, writing them off as being way too girly for me. When will I learn?

India Jane (also, seriously, the coolest name ever) has this amazing relationship with her cooky parents and her younger brother (who I secretly have a tiny crush on as he sounds so sweet). They are uprooted from their aunt's rather luxurious home into new rented accommodation which sounds pretty dire. But with the help of her friends India Jane comes up with a decent colour scheme and some ideas on how to redo her room. Her parents go at it with gusto and soon the house is transformed into boho chic of vibrant colours and quirky knicknacks and freecycle furniture. Except for her brother's room which remains minimalist.

India Jane has to deal with Joe, who has decided that he does like her enough to officially become her boyfriend. Joe veers from being genuinely sweet and cute to alarmingly boy-like and sulky at times and I felt that Ms. Hopkins may have masqueraded as a boy herself to write him so well. Joe shares a lot of India Jane's likes - art, history, exploring and doing "stuff". But as their relationship is very new both of them make some very silly mistakes and it leads to misunderstandings and "words" are had. But, in the end, both Joe and India Jane remain true to one another. India Jane has her head turned by various boys from her past and it's amusing to see (probably because it felt so real) as she struggled to make sense of her attraction to Joe as well as all these other boys who have unexpectedly turned up in her life.

Then there's school - doing the same amount of subjects as everyone else in her year, India Jane is genuinely struggling. She joined late and is fully expected to pull her weight. She tries her best and yet it seems that it's not enough. Add to this the constant nagging worry of what she wants to do as an actual career. This part really struck home as so many people at that time in their lives have no idea which way to go and go on regretting their choices made for almost as long as they live. India Jane's father turns around and says an incredibly poingnant thing and (paraphrased) it's something like: your work does not define who you are, you aren't a banker/accountant/teacher outside of work, you are you and people sometimes lose track of that, unable to make that differentiation. Pretty grown up stuff, to be honest.

We leave India Jane and her friends at the end of book four in a good place, their futures spread at their feet. I closed the covers feeling that I've genuinely had a good time reading it and that I've got quite a bit to think about myself (at the age of 36).

The novel is out now and I can't praise it enough. Cathy Hopkins writes like a dream and India Jane is a wonderful, funny, strong female character - someone you would like to be mates with and have adventures with. Her friends are highlighed as being from strong backgrounds too and I loved their motto of: mates before boys. Sounds to me like they have their heads on properly, that's for sure! Their honesty with each other was refreshing and I particularly liked India Jane's friendship with her BFF in Ireland who she kept in touch with via MSN and Skype. It gives the reader a sense of the immediacy of their friendship.

Cinnamon Girl: Expecting to Fly is out now, from Piccadilly Press. Find Cathy Hopkins' site here.
Who wrote this? Liz at 4:22 pm

Thanks so much for opening up this novel to me, I'll certainly give it a go.

Oh hey, I wasn't laughing AT you, honestly! You can read back through the series and get just as much out of it, I'm sure!

Great review! I loved this one too and I'm so glad you enjoyed it.

Thanks so much for writing such a great review of my book, I'm so glad you liked it - makes it all worthwhile, Cathy Hopkins X

@ Miriam - I am so glad I could intro you to something different. I hope you enjoy it!

@Cathy - wow, thank you so much for stopping by. As you can tell, you've got a new fan. Looking fwd to reading your other work.

omg as a teenager i love cathy hopkins and even though i only started with the third book of the series i felt i knew the two before! what i wonder about is how you captured the thoughts of a 16 yr old in your mind when you wrote it. lov all your books! keep writing more! =D